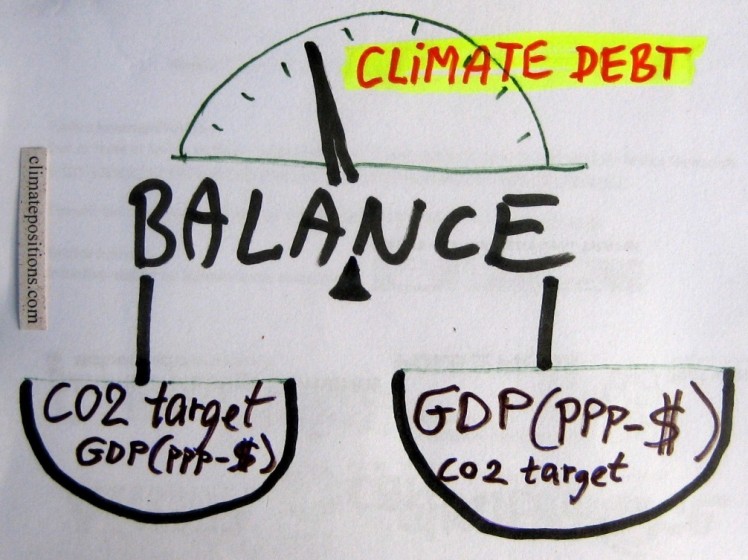 In the table below the Climate Debt of 12-Countries Group is set at 100% in the calculation examples: Colum 1) Current weighing of all indicators and the global CO2 target (which is 2.7 tons per capita), Colum 2) The global CO2 target is doubled (to 5.4 tons per capita by 2024), Colum 3) The value of national GDP(ppp-$) is half neutralized (the average between national GDP and world average is entered), and Colum 4) Calculation 2 and 3 are combined (both double global CO2 target and half neutralization of national GDP). The increased percentages (in comparison with the current weighting of values) are green and the decreased percentages are red. The twelve countries are ranked by the current per capita Climate Debt (the ‘global ranking’ is shown in brackets).

Colum 2) If the global per capita CO2 target is made half as ambitious, then the US share of the total Climate Debt (of the 12-Countries Group, representing around 70% of the global Climate Debt) will increase from 52.67% (the current weighting) to 57.47%; while China’s share will decrease from 14.87% to 12.28%. Brazil, Algeria and Indonesia will be Contribution Free (no Climate Debt). Generally, all but the largest per capita CO2 emitters will benefit relatively from a less ambitious CO2 target in the calculation.

Colum 3) If the weighting of national GDP(ppp-$) per capita is weakened half way to world average, then the US share of the total Climate Debt (the 12-Countries Group) will decrease from 52.67% (the current weighting) to 44.47%; while China’s share will increase from 14.87%  to 23.93%. Generally, wealthy countries will benefit relatively from the weakening of GDP in the calculation.

The table is displayed graphically below. 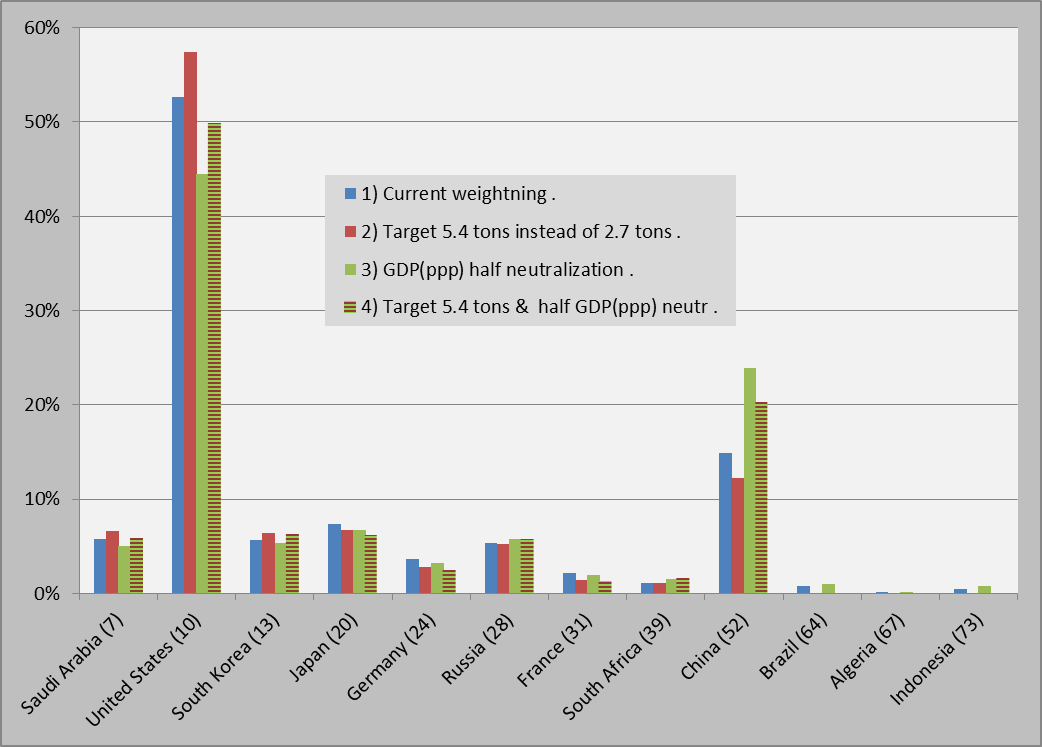 The current global CO2 target and national GDP-weighting are based on two overall ethical concepts:

Or else, a citizen of let’s say Saudi Arabia or the United States would de facto be entitled to more benefiting climate destruction due to emissions from fossil fuels than a Chinese or an Algerian … which of cause is unethical.

Note that all sets of balances between global and national indicators (or even new indicators) and global CO2 targets can be entered and examined of 147 countries with full data in ‘Calculation (Excel)’.

¹The future global per capita CO2 target in ClimatePositions auto-tightens along with increased global warming and rising sea-level. The current target of 2.7 tons per capita by 2024 will be “pushed” twenty years forward at the end of the decade and a new twenty-year period starts by 2020. See this ‘illustration’ (pdf).

²Climate Debt in ClimatePositions is close-by-identified as a percentage of national GDP(ppp-$) over the years, meaning that the indicator of GDP(ppp-$) is designed to give recent GDP more weight than past GDP, and it is termed “GDP+”.