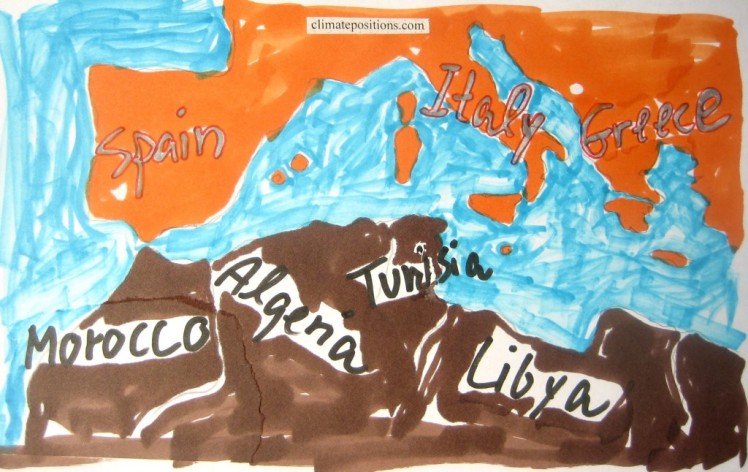 In ClimatePositions 12% of the world’s population live in 36 African countries without any Climate Debt. Conversely, EU is responsible for 13% of the global Climate Debt, or $675 billion in 2013. If EUs Climate Debt were to be paid evenly to the 840 million people in the 36 African countries (which of cause would be stupid!), then each person would get more than $800, or more than one year of income for an average person in Liberia. EU’s prosperity is literally built on free CO2 Emissions from the burning of fossil fuels and the corresponding destruction of the global climate. Brutal trade barriers aimed at e.g. Africa reassure that the historical inequality is maintained. However, people around Africa have televisions, internet and mobile phones – knowledge sharing, climate change and absolute hopelessness will expectedly cause many more refugees heading for EU in the future. According to ‘The UN Refugee Agency (UNHCR)’ close to 500,000 refugees or IDPs (internally displaced persons) were locaded in Libya, Algeria, Tunisia and Morocco, in December 2014. The same four countries are transits for most boat refugees.

CO2 Emissions, climate change and Climate Debt is of cause inappropriate to discuss under these tragic circumstances, but I do so anyway because everything is linked together in a globalized world.

Libya’s updated Climate Debt is $1,528 per capita, Algeria’s is $91, Tunisia’s is $25 and Morocco is Contribution Free (no Climate Debt). See the ‘ranking’ by November 2014. The following examines the indicators of CO2 Emissions from fossil fuels, relative Climate Debt over time and GDP(ppp-$).

The four diagrams below show the CO2 Emissions per capita in decades of Libya, Algeria, Tunisia and Morocco in comparison with the world average (the grey bars). The green bars show the Contribution Free Level in ClimatePositions – the free level is calculated on the basis of the level of CO2 Emissions in 1990s and a number of continuously updated ‘indicators’. If the black bars exceed the green, on average, then the country has a Climate Debt.

The diagram below shows the accumulated Climate Debt per capita since 2005 of Libya, Algeria, Tunisia, Italy and Spain, with the world average set at 100. The impact of the Libyan Civil War (2011) is apparent. 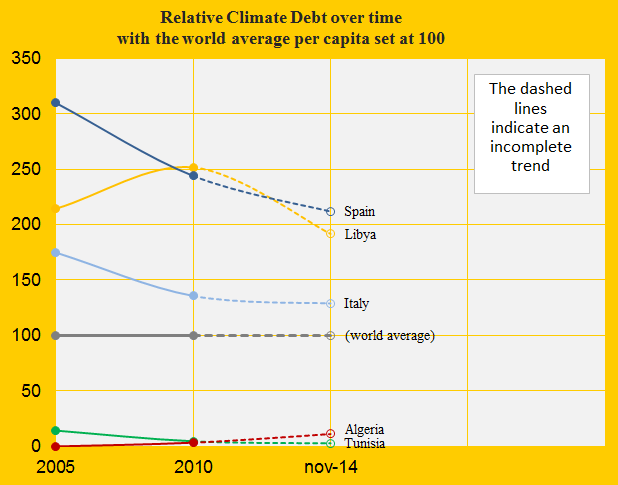 The GDP(ppp-$) per capita since 2000 of Libya, Algeria, Tunisia, Morocco, Italy and the world average is shown in the diagram below. Morocco is by far the poorest. 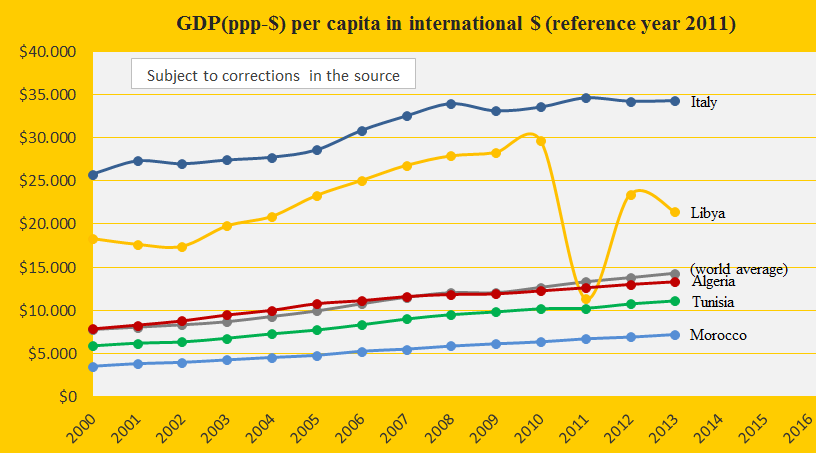 The “intended nationally determined contribution” in ‘Morocco’s COP Submission’ by June 2015, is to reduce greenhouse gas emissions by 32% by 2030 compared to “business as usual” projected emissions. The diagram below shows CO2 Emissions from fossil fuels per capita of the following. Read the comments below the diagram.

Morocco’s intended greenhouse gas reduction by 2030 is very ambitious considering that the country is not responsible for the destruction of the climate. In contrast, ClimatePositions allow a moderate increase towards a global CO2 Emission target in the future (see this ‘illustration’). The overall idea is that poor countries like Morocco are entitled to a fair level of CO2 Emissions from fossil fuels, allowing the economy to grow.