Saudi Arabia was the 12th worst performing country in ClimatePositions 2010 (see the ‘ranking’). In 2014 the total Climate Contribution (climate debt) of the rich authoritarian Islamic oil regime rose to $148 billion or 1.06% of the national GDP(ppp-$) annually since 2000 (ranked number 7; see ‘here’). The neighboring Yemen, the poor authoritarian Islamic regime is Contribution Free. The first diagram shows the development of GDP(ppp-$) of Saudi Arabia, Yemen, Oman, United Arab Emirates, Qatar and the world average. The following examines the indicators: CO2 Emissions, Ecological Footprint and Environmental Performance of Saudi Arabia and Yemen.

The two diagrams below show the CO2 Emissions (carbon dioxide) per capita in decades of the two neighboring countries. The increasing Saudi Arabian emissions indicate a regime without concern for climate change and the lives of future generations (however, there have been some policy developments in relation to Solar). The emissions of Yemen are very low.

The population of Saudi Arabia is estimated to be almost 27 million in 2013. In 1950, the population was 3 million. Since 2000 the growth rate has been 2.4% annually. The population of Yemen was about 24 million in 2011 and 4.3 million in 1950. Since 2000 the growth rate in Yemen has been 2.9% annually. See the related development of the Ecological Footprint (without CO2 Emissions) of the rich Saudi Arabia, the poor Yemen and the average of 152 countries (set at 100), in the diagram below. A large Ecological Footprint indicates a human consumption of the planet’s resources, that is greater than the planet’s ecological capacity to regenerate. 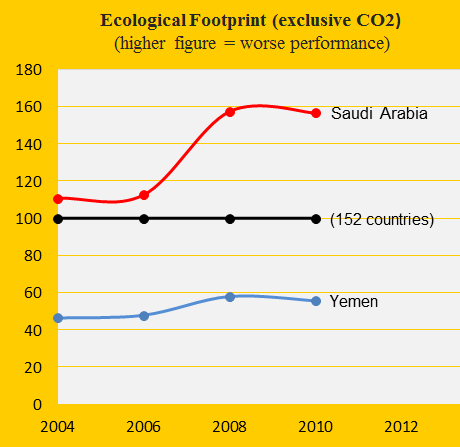 The Environmental Performance is more a domestic matter and rich countries often perform better than poor. See the relative performance of Saudi Arabia, Yemen and the average of 178 countries (set at 100) in the diagram below. Examine the detailed scores and ranks of ‘Saudi Arabia’ and ‘Yemen’. 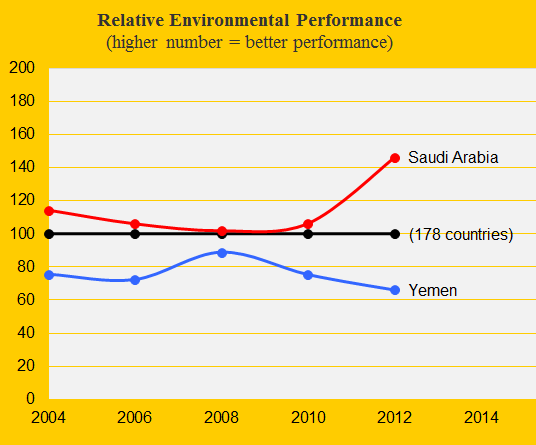 A hypothetical example: If Saudi Arabia paid its accumulated climate debt of $148 billion to a Global Climate Fund and also implemented an instant green transition which immediately brought down CO2 Emissions to the Contribution Free Level (of 6.2 tons in 2014), then the future export of fossil fuels should be seen in connection with applications for a fictional Global Climate Fund and its guidelines.

Data on national and global Populations: EIA, U.S. Energy Information Administration (links in the menu “Calculations”), and from Wikipedia: ‘Saudi Arabia‘ and ‘Yemen‘).

Sources on petroleum and gas production are from Wikipedia: ‘Saudi Arabia‘ and ‘Yemen‘ and EIA, U.S. Energy Information Administration.