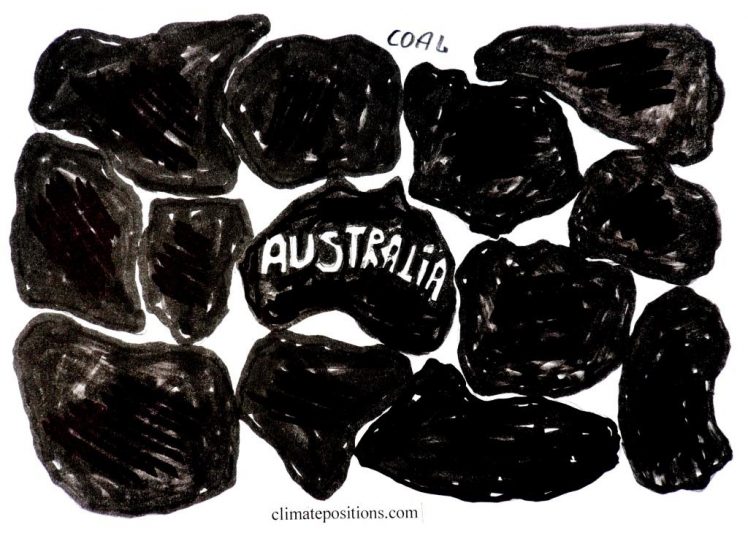 The table reads as follows: Australia is the world’s 5th largest coal producer, responsible for 5.8% of the world’s coal production in 2012. The CO2 Emissions from burning of coal in Australia amounted to 9.5 tons per capita in 2012 which was the 2nd highest among the 20 listed countries. The CO2 Emissions from fossil fuels and cement production amounted to 16.0 tons per capita in 2012 and 57% was caused by coal combustion. The current Australian Climate Debt accumulated since 2000 amounted to 1.05% of the GDP(ppp-$), annually, which ‘Ranks‘ Australia 8th among 148 countries in ClimatePositions.

The twenty countries represent around 51% of the planet’s land area, 58% of the population, 67% of the Climate Debt and 98% of the coal production.

The first diagram shows the per capita CO2 Emissions from fossil fuels (without bunker fuels) and cement production in decades in comparison with the world average. CO2 Emissions since 2012 are preliminary estimates. The green bars are the Contribution Free Level, determined by the level of CO2 Emissions in the 1990s and a number of continuously updated ‘Indicators’.

The next diagram shows the per capita CO2 Emissions from fossil fuels (without bunker fuels) and cement production since 2000. CO2 Emissions in 2012, 2013 and 2014 are preliminary estimates. The CO2 Emissions from coal combustion increased gradually by 75% between 1990 and 2009 – in 2012 emissions was 9% lower than the record year of 2009 (during this period the renewable electricity generation (Btu) as share of the total energy production (Btu) increased only from 1.6% to 1.8%).

In 2014 the Australia was the 18th wealthiest country among 148 with full data in ClimatePositions. The diagram below shows the development in GDP(ppp-$) since 2000, in comparison with Kazakhstan, South Africa, the United States, Poland and the world average. 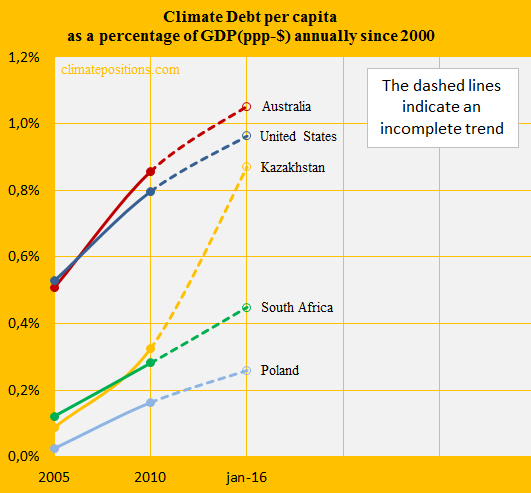 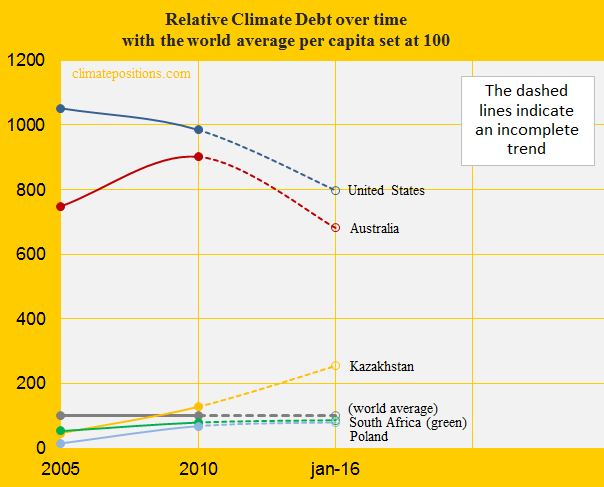 ²Due to missing data on GDP(ppp-$) North Korea is not included in the rankings of ClimatePositions. However, the authoritarian regime is de facto Climate Debt Free..

A hypothetical example: If Australia had started its CO2 Emission cuts ten years earlier, in 2000 instead of 2010, and continued the reduction rate till 2014, then the current per capita Climate Debt would have been $1,985 instead of $5,613, and the ranking would have been 19th instead of 8th.