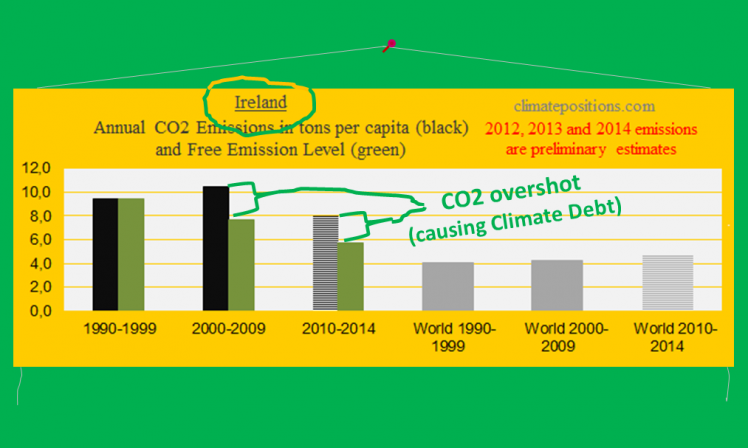 The gap between the per capita CO2 emissions and the Contribution Free Level (the green bars) is the basis for calculating the Climate Debt in ClimatePositions, as illustrated in the top image. See also this ‘Graphic presentation (pdf)’.

Ireland has an ancient tradition for using ‘Peat’ (or “turf”) for home fires and this energy-source is still widely used in rural areas. Peat is an accumulation of partially decayed vegetation and the peatland-ecosystem is the most efficient carbon sink on the planet (the European Union is attempting to protect these habitats by fining Ireland for digging up peat). Peatland covers around 2% of global land area and it takes thousands of years to develop. Often, peat is the first step in the geological formation of other fossil fuels such as coal. The United Nations Framework Convention on Climate Change (UNFCCC) classifies peat as a “fossil fuel”, whereas the Intergovernmental Panel on Climate Change now classifies peat as “slow-renewable fuel”. Note that regrowth is reported to take place in only 30-40% of the peatlands. The use of peat is not included in the CO2 Emissions in ClimatePositions.

The next diagram shows the per capita Climate Debt since 2005, in comparison with the United Kingdom, France, Canada and the United States, with the world average set at 100. In real money the accumulated total Irish Climate Debt increased from $8.0 billion in 2010 to $12.5 billion by January 2016 (the ‘Ranking’ improved from 34th to 39th among 148 countries). 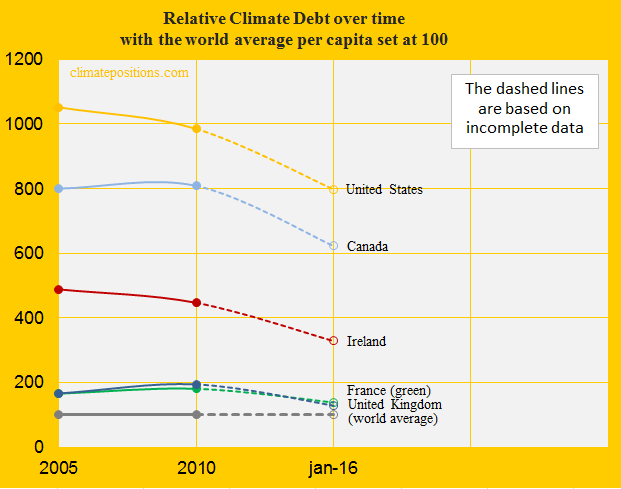 The next diagram shows the development of GDP(ppp-$) since 2000, in comparison with the same four countries and the world average. 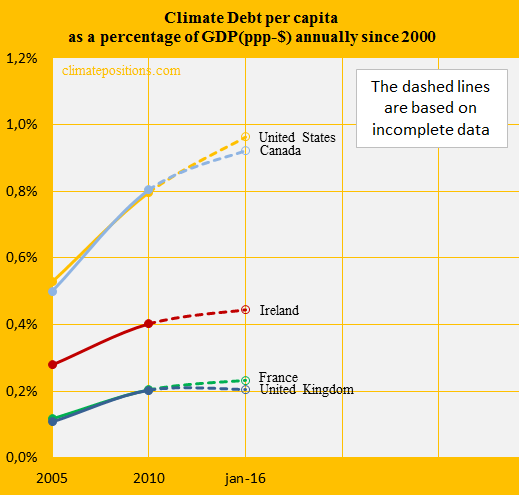 PowerPoint diagram is by Claus Andersen, 2016.