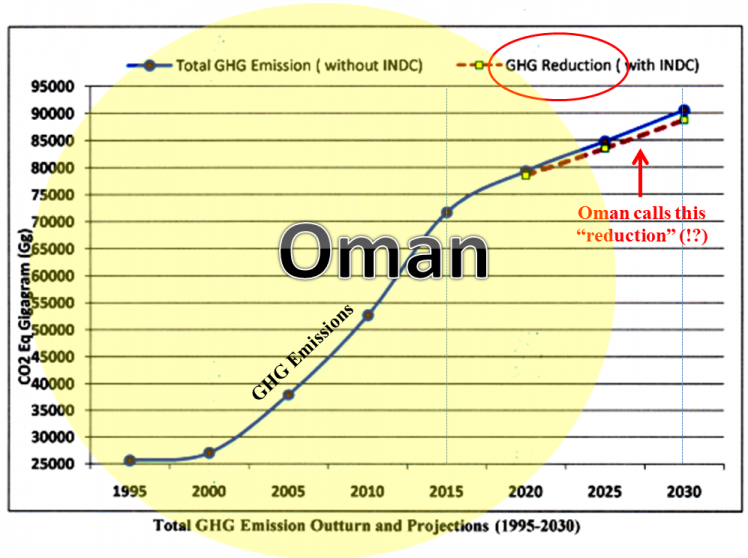 The relative Environmental Performance over time of the Oman, United States and Portugal, with the world’s average set at 100, is shown below. The ‘Environmental Performance Index’ published January 2016 (data-year is set at 2014 in the diagram) ranks Oman 126th among 180 countries. See the ‘Details’ on Oman’s performance. The previous ‘Index published in 2014’ ranked Oman 100rd. 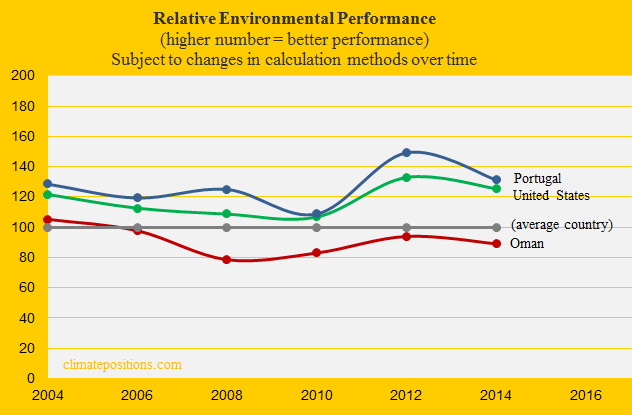 The diagram below shows the Omani development of GDP(ppp-$) per capita since 2000, in comparison with United States, Saudi Arabia, Iran, Portugal and the world average. Since oil and gas are key economic contributors in Oman (hydrocarbons accounting for close to 86% of government revenues in 2013²), both the drop in oil-prices and high population growth-rates (the population grew by 53% between 2009 and 2014) have had significant impact on the graph.

January 2016 the Omani Climate Debt per capita as share of the GDP(ppp-$), since 2000, was 1.60% annually, which is the 4th highest among 148 countries – in 2010 Oman ranked 8th. The development since 2005 is shown in the diagram below, along with the same group of countries. The turbulent graph is strongly interconnected with changes in the per capita GDP(ppp-$)³, which again is related to changes in the oil-marked and the population-growth. 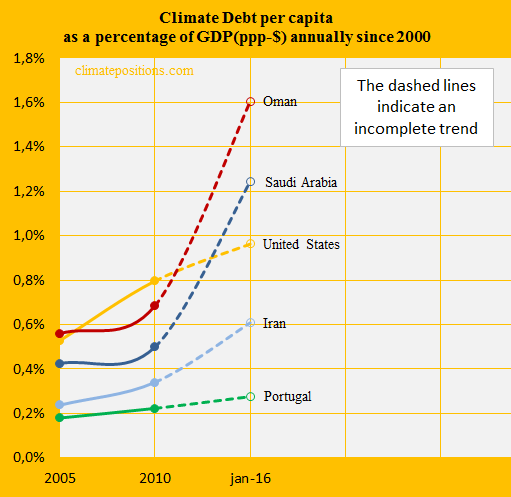 ¹According to a ‘2015-study in the journal Nature‘ around 61% of all known extractable gas reserves in Middle East (49% globally) and 38% of all known oil reserves (33% globally) will have to stay in ground beyond 2010 if global warming are to be limited to 2°C.

³Note that historic levels of GDP(ppp-$) has a gradually reduced impact on the Climate Debt in comparison with resent levels.

PowerPoint graph of Oman’s 2030-projection of GHG-emissions (from the COP Submission 2015) by Claus Andersen, 2016.