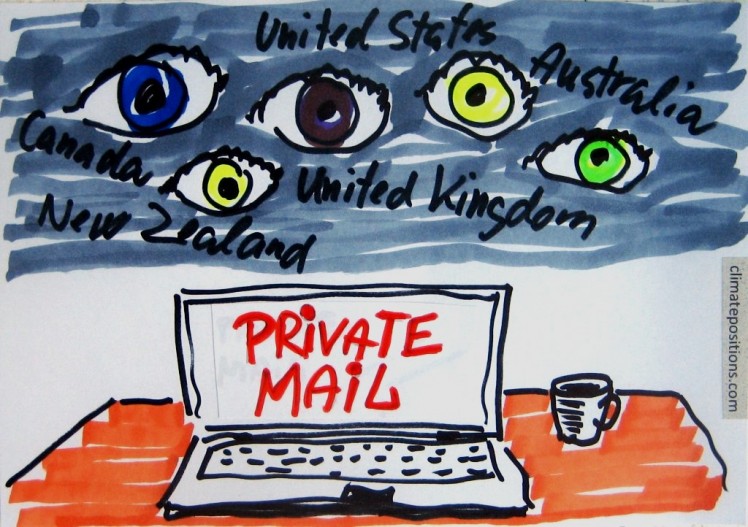 Is this the good guys watching the bad guys in order to make the world a better place? No, of course not. When it comes to climate change response, the Five Eyes Alliance (the countries seen as a whole) is performing miserable. The diagram below show the five countries’ total share of the global: 1) Population (6.4%), 2) GDP(ppp-$) (28.3%), 3) CO2 Emission (25.1%) and 4) Contribution (52.0%). Put bluntly this rich club of countries protects its own material privileges regardless to the planet.

In the ClimatePositions ranking 2010 Australia was the 6th worst performing country out of 145, United States was  the 7th, Canada the 8th, New Zealand the 19th and United Kingdom the 27th. The countries’ Ecological Footprint (without CO2) were 2-3 times larger than the global average.

Denmark, France, Netherlands and Norway belong to the circle just outside the Five Eyes Alliance. What they do and what they get out of it is of course secret.

Data on populations are from the EIA, U.S. Energy Information Administration (links in the menu “Calculations”).