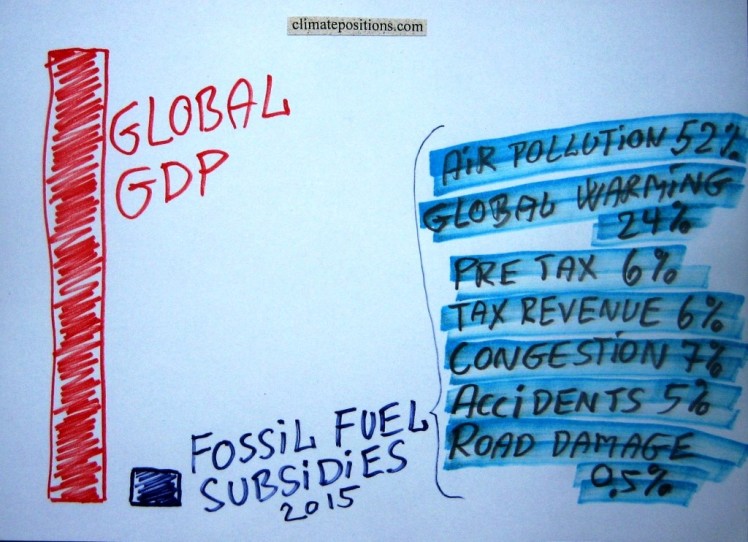 The table below divides the 155 countries from the IMF survey into two equally populated country groups: 1) 81 countries with Climate Debts larger than $69 per capita in 2013 (see the ‘ranking’), and 2) 74 rest countries of which the large majority have no Climate Debt. As it shows, the Climate Debt-group is responsible for the overwhelmingly large proportions of both fossil fuel subsidies, CO2 Emissions from fossil fuels and the accumulated Climate Debt since 2000.

In general, there seems to be no convincing correlation between reductions of subsidies and slowdown of the accumulating Climate Debt, or conversely. Only Jordan, Botswana and Honduras have reduced both subsidies and Climate Debt (as percentages of GDP), while 12 countries have increased both. 11 out of the 18 largest per capita fossil fuel producers have reduced subsidies, while 2 have increased. According to IMF calculations the ending of fossil fuel subsidies would reduce global CO2 Emissions by more than 20%. More about the five largest CO2 emitters below the table.

This quote from the IMF survey (Conclusion), describes the absurdity just fine:

“It is generally in countries’ own interest to move ahead unilaterally with energy subsidy reform. Top subsidizers in percent of GDP and in per capita subsidies stand to gain the most. The benefits will mostly accrue at the local level, by reducing local pollution and generating much needed revenues. Taxing fuels to reflect environmental costs is also straightforward administratively, as it can build off road fuel excises which are well established in most countries. Energy subsidy reform can also contribute to carbon emissions reduction and help countries make pledges ahead of the Paris 2015 UN climate conference. To achieve significant carbon emissions cuts at the global level, it would be essential for top subsidizers in dollar terms to play a leading role.”

The ‘International Monetary Fund’ (IMF) with the ‘Full Study‘ (pdf) and the ‘country database‘ (excel).