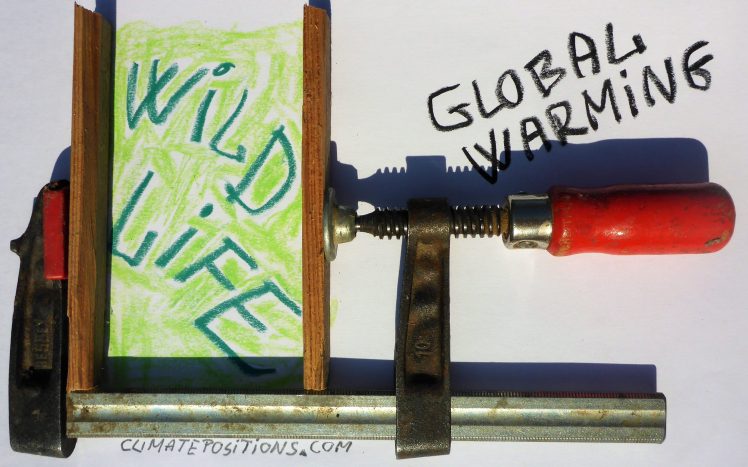 World Wildlife Heritage is miraculous. However, human caused Climate Change is a brutal attack on the biodiverse wildlife on Earth. In a recent analysis ‘Published in the journal Science‘ data were gathered on geographic ranges and current climate conditions of 31,000 insect species, 8,000 birds, 1,700 mammals, 1,800 reptiles, 1,000 amphibians and 71,000 plants. Then, it was calculated how the ranges change when global warming means some regions can no longer support particular species. The analysis only took global warming as such into consideration, not the impact of lost interactions between species or the impacts of more extreme weather events; nor the interaction with wildlife degradation for other reasons.First, the researchers counted the number of species they expected would to lose more than half their geographic range, by 2100, in three warming scenarios. Second, they combined the losses for each species-group into an average:

For plants and vertebrates, the number of species losing more than half their geographic range by 2100 is halved if warming is limited to 1.5°C, compared with 2°C. However, for insects, the number is reduced by two-thirds. Read more about the research in The Guardian: ‘Climate change on track to cause major insect wipeout, scientists warn‘. Information on wildlife degradation due to global warming interacting with wildlife degradation for other reasons than just the warming is listed below.