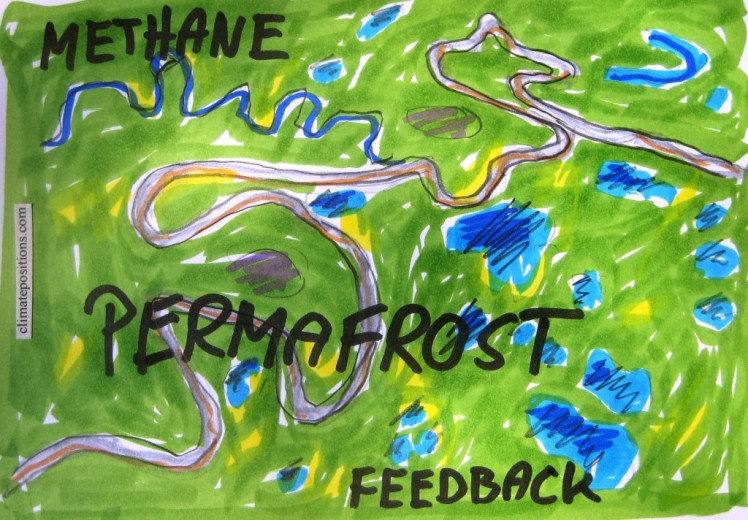 Methane is produced by microorganisms called ‘methanogens’, classified as ‘archaea’, a domain distinct from bacteria. Methane is a waste product from the microbes’ eating of organic material. There are over 50 described species of methanogens, living in a variety of warm anoxic environments such as the digestive of termites and ruminants (particularly cows and sheep), rice-fields, wetlands, landfills, marine sediments, hot springs and submarine hydrothermal vents, as well as in solid rock kilometers below the earth’s surface. Many more environments could be mentioned. The leaks of methane in the past are trapped in large quantities in sediments on the bottom of the ocean, in natural gas and in permafrost (methane exists in 24% of exposed land in the Northern Hemisphere). The complex system of storage and sinks are not at all understood.

While carbon dioxide last approximately 100 years in the atmosphere, methane only last 9-15 years (and then it releases carbon dioxide and water vapor). On the other hand, the greenhouse effect of methane is around 25 times more powerful than carbon dioxide for a given weight in averaged over 100 years. The global warming effect of peeking methane emissions is extreme and rapid in comparison with carbon dioxide.

The continuously high level of CO2 Emissions from the burning of fossil fuels is the main cause of global warming. Since the methane-leaking microorganisms prefer warm environments they gradually leak more methane because of the warming, which causes more warming and even more methane etc. An aggressive positive methane feedback loop has been created. The melting of the permafrost is another recognized and even more fearsome feedback loop. The potential for multifarious methane feedback loops are immense. See these three videos: ‘Steven Chu on Permafrost feedback, 2010 (1:34)’, ‘NASA Finds Amazing Levels Of Arctic Methane And CO2, 2013 (4:32)‘ and ‘Arctic Death Spiral, 2014 (11:59)‘. Note that the most widely used climate models to predict global warming do not include methane feedback loops.

The foundation of the dangerous increase of methane leaks is the burning of fossil fuels. The table below shows some key data of the world’s ten largest CO2 emitters (responsible for 68% of the global emissions). See the ranking of Climate Contributions (climate debt) per capita ‘here‘.

Information about methane: ‘Wikipedia‘, ‘All About Methane‘ and ‘EPA (US)‘.

Summery of ‘new research‘ (2014) from Princeton University, suggesting that methane from freshwater systems will rise with the global temperatur.