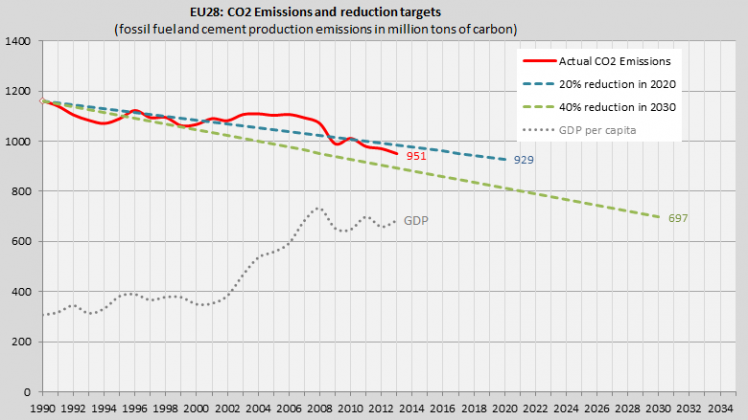 Back in 2008 the EU agreed on a joined reduction of greenhouse gas emissions by 20% by 2020, compared to 1990. Whether the new reduction targets are ambitious or depressively droopy depends on your hopes for the future  and who you compare with. The top diagram shows the CO2 Emissions (from fossil fuels and cement production) of EU in 1990-2013. The blue dashed line illustrates a 20% CO2 Emission reduction by 2020 and the green dashed line illustrates a 40% reduction by 2030. Note that the graphs do not reveal the exact greenhouse gas emission inventories of the EU. Burden sharing of the new targets in the EU is not yet agreed. The grey dashed line shows the GDP per capita in the EU. The economic upturn between 2002 and 2008 coincides with the failure of emission reductions – after the financial crash in 2008 emissions began to decrease again.

GDP per capita of the European Union: ‘http://data.worldbank.org/indicator/NY.GDP.PCAP.CD/countries‘ (download data)

Article in the Guardian: ‘http://www.theguardian.com/world/2014/oct/24/eu-leaders-agree-to-cut-greenhouse-gas-emissions-by-40-by-2030‘