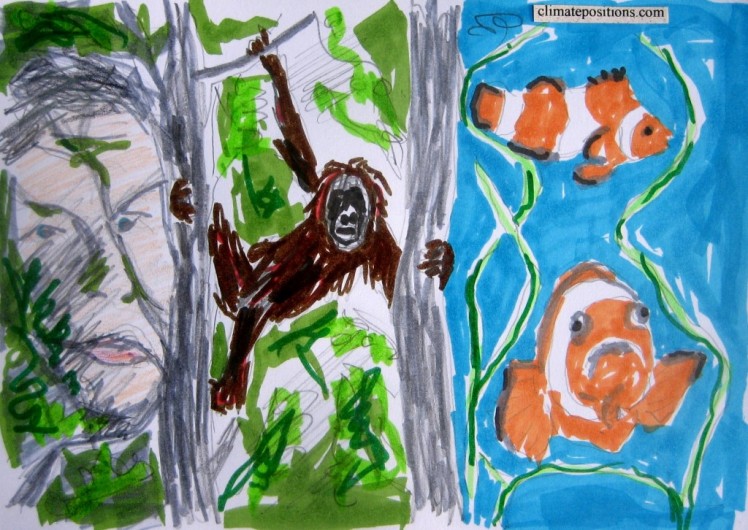 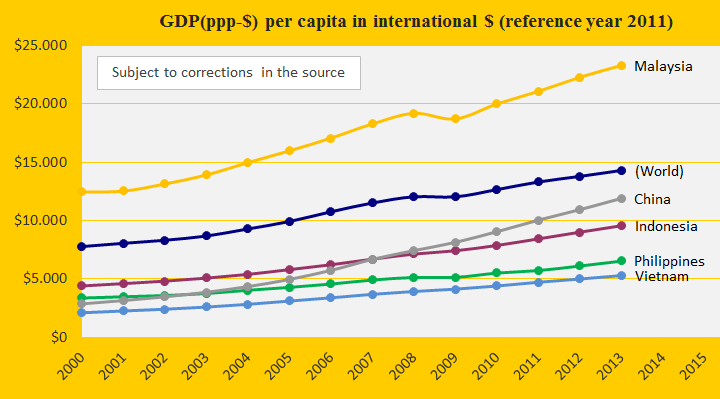 The CO2 Emissions of the Philippines have remained at around 0.8 tons per capita since 1990s (see the diagram below) and this level is not causing any global warming. Malaysia, however, has increased emissions from 4.3 tons per capita in the 1990s to 6.7 tons in 2011. The Contribution Free Level of Malaysia was 2.9 tons in 2011. The oil production per capita ranks Malaysia 29th (in 2007) and the Philippines 107th (in 2010). However, the Malaysian fossil fuel reserves are limited (19-33 years have been estimated). The Philippines is the world’s 2nd largest geothermal producer, supplying 27% of electricity production.

The Ecological Footprint tends to grow along with economic growth, unless the policy supports sustainability. The diagram below shows the Ecological Footprint (without CO2 Emissions) of the Philippines, Malaysia and the world average (set at 100). The relatively large Malaysian footprint is due to cropland, forest (see next section) and fishing. 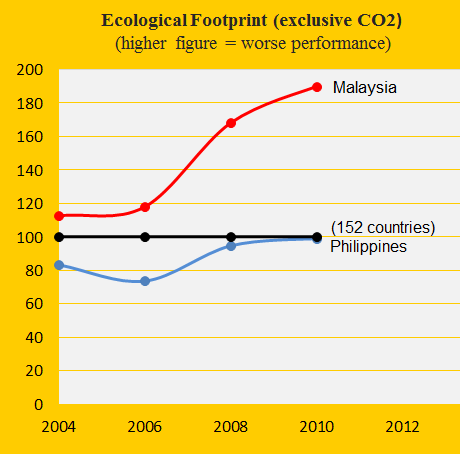 Both countries are mega-diverse with priceless rainforests and other habitats and both are located in the ’Coral Triangle’ (WWF website), recognized as the global center of marine biodiversity.

The Forest Cover of the Philippines increased from 22% in 1990 to 26% in 2010 according to ‘United Nations, MDG Indicators‘. However, the forest cover doesn’t tell much about the ecological value of the forests (the remaining contiguous forest habitats might be as low as 7% of the total area according to one ‘source’). In 1900 the cover was around 70%. Deforestation, often illegal logging, is continuously a problem and according to Conservation International, the Philippines is one of the few nations, that is, in its entirety, both a hotspot and a mega-diversity country, placing it among the top priority hotspots for global conservation.  The pressure on the rainforest is also due to a population growth rate of 2.9% annually since 2000, or 2.4 times the world average. The 100 million Philippines have one-sixth of the world average space per capita. The country consists of more than 7,000 islands and the coastline is the 5th longest in the world. The rainforests and its extensive coastlines make it home to a diverse range of birds, plants, animals and sea creatures. It is one of the ten most biologically mega-diverse countries in the world and is near the top in terms of biodiversity per unit area. The maritime waters encompass unique and diverse marine life with numerous corals and fish species (‘The Tubbataha Reef’ was declared World Heritage in 1993). The Philippines is considered to be one of the most vulnerable countries to the effects of global warming and extreme weather events (read ‘WWF’ and this ‘blog’).

The Forest Cover of Malaysia decreased from 68% in 1990 to 62% in 2010 (again, other sources are more pessimistic, see ‘here’). The two parts of the country (Peninsular containing 40% of the area and East Malaysia on the island of Borneo) separated by the South China Sea, share a largely similar landscape. Malaysia is also mega-diverse and it is estimated to contain 20% of the world’s animal species and some forests are believed to be 130 million years old (for example ‘Taman Negara National Park‘ in central Peninsular). Besides tropical rainforests, of which 12% is pristine, the country has the world’s fifth largest mangrove area. Agriculture, forestry and urbanization contribute to the destruction of forests, mangroves and other ecosystems. Floods in East Malaysia have been worsened by the loss of trees. Most remaining forests are found inside national parks. The maritime waters of Malaysia, as of the Philippines, are in the Coral Triangle and the waters around Sipadan Island are the most biodiverse in the world. Bordering East Malaysia, the Sulu Sea is another biodiversity hotspot. Habitat destruction and illegal fishing (with methods such as dynamite fishing and poisoning) are a threat for the marine ecosystems. Malaysia has already been affected in a number of ways by the climate change and extreme weather events where the coastal ecosystems are affected by warming, rising seas, ocean acidification and coral reef bleaching.

A hypothetical example: If Malaysia paid it’s Climate Contribution (climate debt) of $28 billion accumulated between 2000 and 2014 to a Global Climate Fund, and other Asian countries also paid their climate debt, then the Fund would contain a total of $947 billion (roughly 20% of the global climate debt). Malaysia and the Philippines would be obvious recipient countries of financial support for rainforest- and environmental projects.

Information on rainforest and marine areas in the Philippines are from ‘Wikipedia‘.

Information on rainforest and marine areas in Malaysia are from Wikipedia‘ and ‘here‘.

Facts about rainforests: ‘The Nature Conservancy‘.