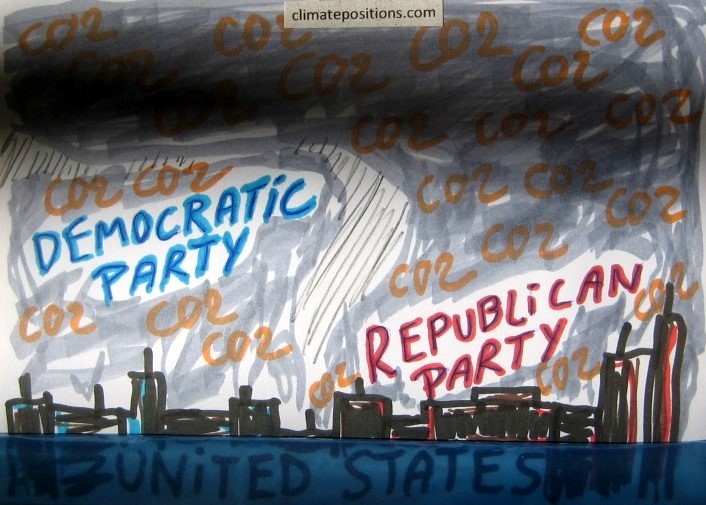 To frame the climate-political situation in the United States, the table below shows the CO2 Emissions per capita for each state marked as Republican (red) and Democratic (blue). A quick calculation shows that the eight largest CO2 emitting Republican states emit an average of 55 tons of CO2 per capita (large and small states count the same). No country in the world exceeded 48 tons of CO2 per capita. The 24 Republican states emitted an average of 31.8 tons and the 27 Democratic states emitted 13.9 tons. What is the cause and effect is an open question, but since the United States has counteracted every attempt to reach a binding global climate agreement for decades, one might assume that a vote for the Republican Party so far has been a vote for climate destruction and extreme weather events worldwide. Read about demographic global warming opinion profiles in US ‘here‘.

Hypothetical example no. 1:  If all states in the U.S. emitted the same CO2 per capita since 1990 as the Democratic states, then the current national Climate Contribution (debt) would be $4,100¹ per capita instead of $5,182.

Hypothetical example no. 2:  If all states in the U.S. emitted the same CO2 per capita since 1990 as the Republican states, then the current national Climate Contribution (debt) would be $6,700¹ per capita instead of 5,182.

¹ The Calculation is not consistent but the overall picture is clear. Included in the calculation are 1) CO2 Emissions per capita by state and 2) Median household income by state (set at $54,564 per capita in Democratic states and $45,362 in Republican states).

Information on the presidential election 2012: ‘Wikipedia‘.