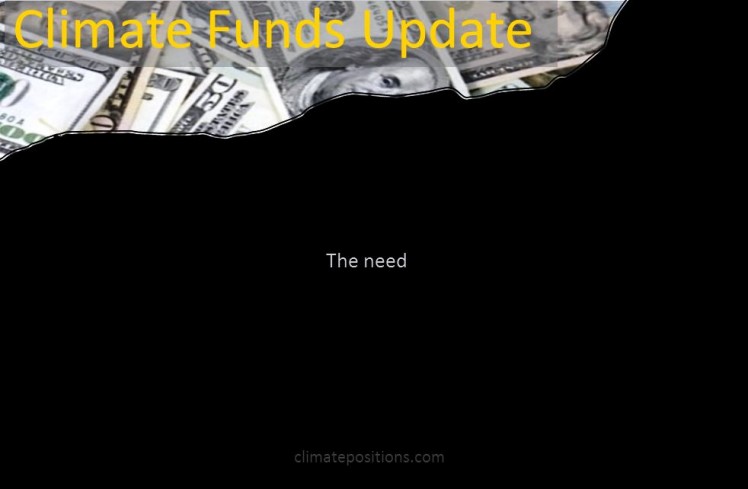 Only 79% of the total deposited climate funding of $17 billion is categorized as “Approved” and only 52% of the total deposited climate funding is both “Approved” and aimed at countries with no Climate Debt in ClimatePositions. Other studies from e.g. OECD (see the sources and links at the bottom) reach up to around $62 billion of climate financing (in 2014) because they include loans, export credits, development donations labelled “climate-friendly” etc.

The method of calculating Climate Debt is identical for all countries – only the national indicator-values vary. The chosen ‘indicators’ and the mutual weightings are of course open for disputes. Different weightings can easily be entered³ and tested in ‘ClimatePosition (Excel)’.

Alternative CO2 Emission targets can also be entered. Below, the CO2 target (tons of CO2 emitted from fossil fuels, per capita, by 2024) has been loosened and the new per capita Climate Debts has been calculated for the United States and China. The table is read like this: If the global CO2 Emission target were to be set at 6.0 tons per capita, by 2024 (instead of the current 2.7 tons), then China’s Climate Debt would be $245 per capita, or 4.6% of the one of the United States (instead of the current 6.6%). If the 6.0 tons-target were to be effectuated, then the allowable level of CO2 Emissions from developing countries would increase dramatically. See this ‘graphic presentation’ (pdf) of the methodology.

¹The country-sourced funding is subtracted the accumulated national Climate Contributions in ClimatePositions. The rest-funding, which is less than 6% of the total ‘Climate Funds Update’ (Contributions to the funds / Multilateral by country / Money deposited), is non-national contributions from European Commission, Investment Income, Interests, NGOs and Sale of CERs – these funds are not included in ClimatePositions or in the table above.

²Only Luxembourg is excluded due to missing data (Ecological Footprint) and has contributed to the climate funds.

Source on climate change financing is from ‘Climate Funds Update’ (Contributions to the funds / Multilateral by country / Money deposited).