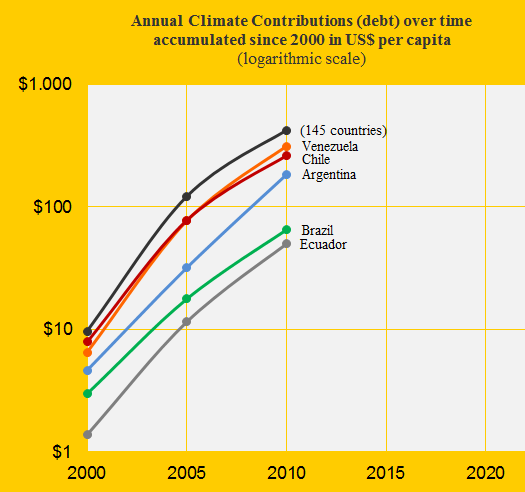 The two diagrams below show the Colombian and the Venezuelan CO2 Emissions per capita in decades in comparison with the world average. Colombia has kept an acceptable low level, whereas Venezuela has increased the large level of emissions.

Both Colombia and Venezuela have Ecological Footprints larger than the world average (see the diagram below). Grazing land enlarge the footprint of both countries. 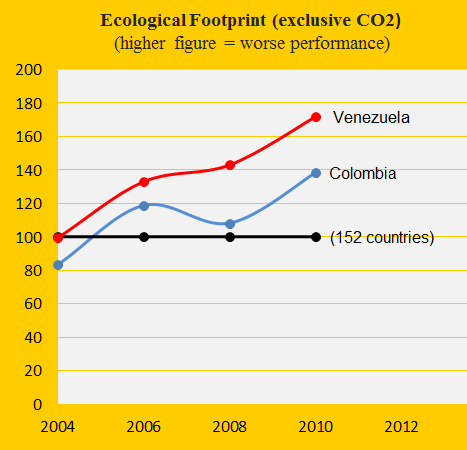 The Environmental Performance of both Colombia and Venezuela is slightly better than the world average, with opposite trends since 2008 (see the diagram below). 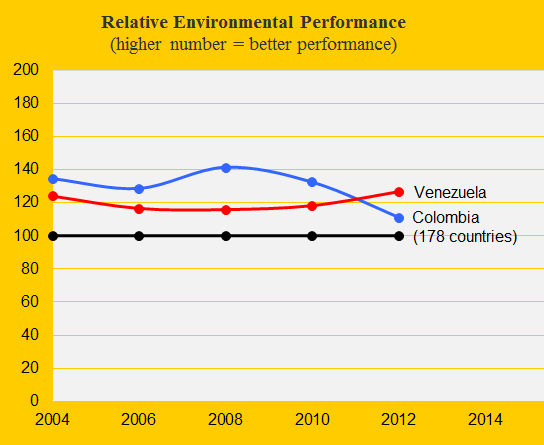 A hypothetical example: Had Venezuela emitted an average of 5 tons of CO2 per capita annually 2000-2011, instead of 6 tons, the Climate Contribution (climate debt) in ClimatePositions would have been $5.8 billion instead of $11.7 billion.

Venezuela is one of the ten most biodiverse countries on the planet, yet it is one of the leaders of deforestation due to mining, oil extraction and logging. State-run oil production and export is a vital source of revenue for the economy in Venezuela. The country was a founding member of OPEC, and sits on worlds largest proven oil reserves (source: ‘Wikipedia‘) .In 2003, 70% of the nation’s land was under conservation management in over 200 protected areas. The forest cover decreased from 59.0% in 1990 to 52.5% in 2010, which is an extra cost of $2.9 billion in Climate Contribution. Today Venezuela has less forest cover than Colombia, which has cut down from 56.3% forest in 1990 to 54.5% in 2010. Colombia is considered more megadiverse (extremely and importantly biodiverse) per square kilometer than any other country (source: ‘Wikipedia‘).