The first diagram shows the Fossil CO2 Emissions per capita annually between 2000 and 2018. The green bars show the Free Emissions Level. The gap between the green and the black line is the calculation bases of the Climate Debt. The dramatic reductions since 2014 are accompanied by a devastating economic collapse. The next diagram shows per capita GDP(ppp-$) of Venezuela, Brazil, Mexico, Chile, Panama and Ecuador and World average. The lower Venezuelan scenario (red circle) shows a more likely 60% decrease of GDP in 2018, compared to 2014 (instead of World-trend growth due to lack of national data). The third diagram shows the ‘per capita Climate Debt‘ trends between 2010 and 2020, with World average set at 1, of Venezuela, Brazil, Mexico, Chile, Panama and Ecuador. The stippled line shows the 60% GDP-decrease scenario in which the current Venezuelan Climate Debt would be $813 per capita, instead of $1,045. 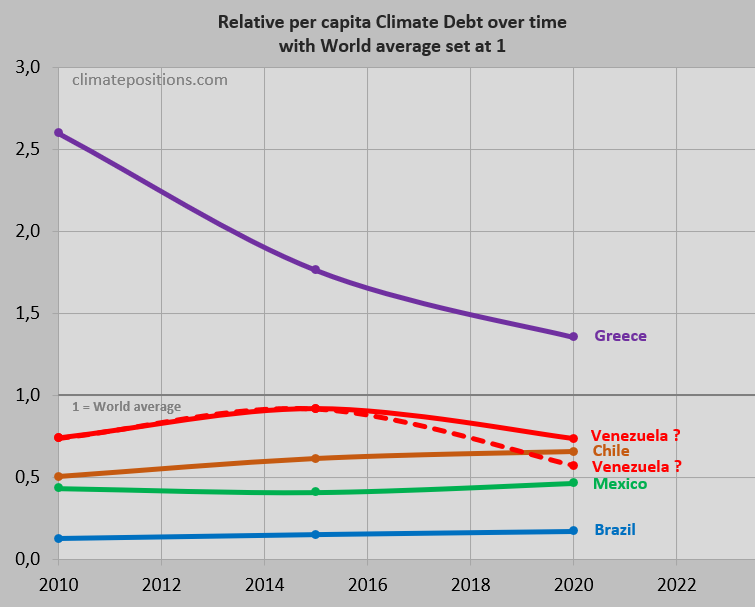 The last diagram shows the changes in Forest Cover and Primary Forest between 1990 and 2015. Had Venezuela kept its Forest Cover since 1990, and had all become Primary Forest, then the current Climate Debt would decrease by 34%. Global forest-updates are expected in 2020.