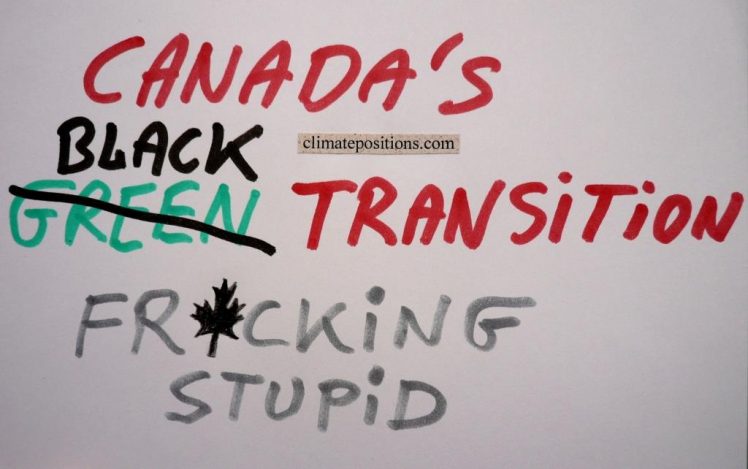 The next diagram shows the per capita CO2 Emissions from fossil fuels (without bunker fuels) and cement production since 2000. CO2 Emissions in 2012, 2013 and 2014 are preliminary estimates. The changes in energy mix causing the reductions in recent years are examined below the diagram.

Here are some key data on Canada’s energy supply (Btu):

In brief, Canada’s improved energy efficiency since 2000 has been more than eaten by the growing population and the significant cuts in CO2 Emissions is mainly due to the energy shift from coal to petroleum and natural gas from fracking.

‘The Canadian Intended Nationally Determined Contribution’ at COP21 “intends to achieve an economy-wide target to reduce its greenhouse gas emissions by 30% below 2005 levels by 2030.” If the target were to be achieved by 30% cuts in per capita CO2 Emissions from fossil fuels (without bunker fuels) and cement production, then emissions would drop from 14.1 ton in 2011 to 12.2 tons by 2030 – nothing more. This intended reduction target equals a burden for the climate as if Canada’s 1991-emissions had dropped 6% compared to 1990-level and remained at this slightly lower level of 14.7 ton the next 40 years, till 2030. The Canadian fossil fuel strategy (“black transition”: shifting from coal to oil and natural gas from fracking) might have been operational in the 1990s, when the global carbon budget was less alarming.

In 2014 the Canada was the 16th wealthiest country among 148 with full data in ClimatePositions. The diagram below shows the development in GDP(ppp-$) since 2000, in comparison with Australia, New Zealand, Sweden, Finland and the world average. 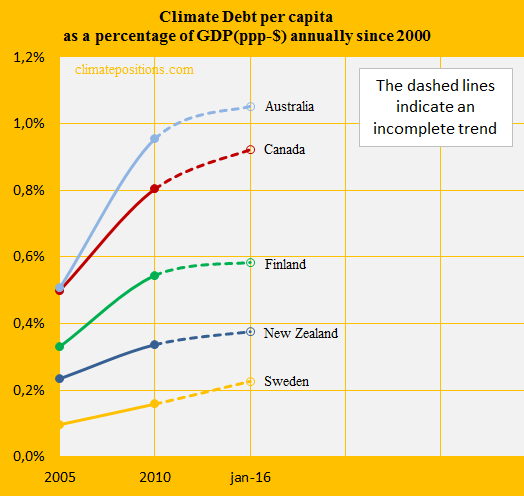 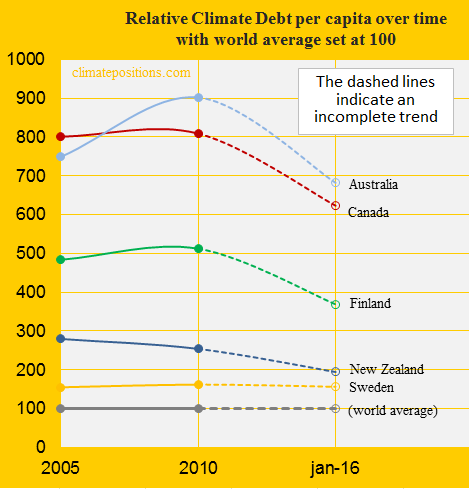 A hypothetical example: If Canada had started its CO2 Emission cuts eight years earlier, in 2000 instead of 2008, and continued the reduction rate till 2014, then the per capita Climate Debt would have been $1,374 instead of $5,155, and the ranking would have been 30th instead of 10th.

Article in Huffington Post about methane from oil and natural gas: ‘The Fossil Fuel Industry Is Worse For The Climate Than We Thought‘.

About fracking in Canada: ‘http://www.sourcewatch.org/index.php/Canada_and_fracking‘.