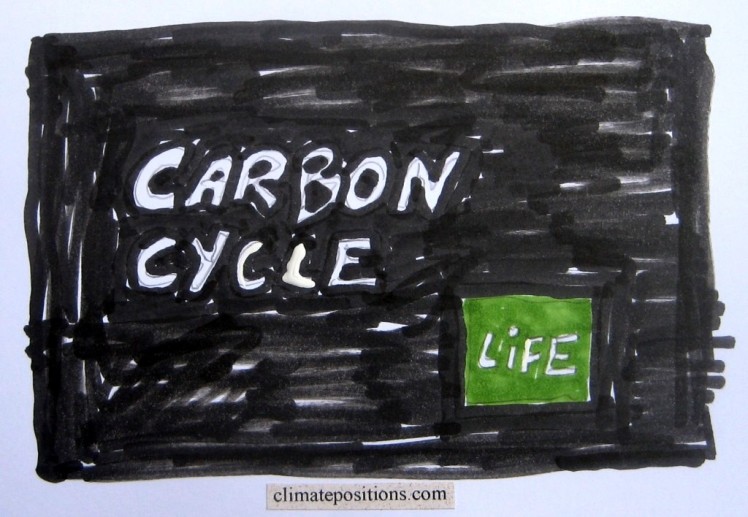 Although the total mass of carbon on earth is huge most of it is stored inactively in the lithosphere (some is frozen in the pedosphere) and the annual exchange among reservoirs is a minor part. Some carbon is released into the atmosphere and the oceans through volcanoes and hotspots. Despite this, the overall carbon exchange balance is stable – apart from the human impact (more below). As an example approximately 122 gigaton of carbon is absorbed annually from the atmosphere by photosynthesis (plants, algae and bacteria) and about the same amount is released by respiration (animals). Oceans contain the largest mass of actively cycled carbon and the surface layer holds large amounts of dissolved organic carbon that is exchanged rather rapidly with the atmosphere. Carbon enters the oceans mainly through the dissolution of atmospheric carbon dioxide or through rivers as dissolved organic carbon. However, around 98% of the oceans’ carbon is stored in the deep layer and the circulation between the two layers is very slow.

The human impact on the carbon cycle is multifaceted and destabilizing on the composition of the atmosphere:

To put the human impact into perspective the total anthropogenic carbon dioxide emissions from the burning of fossil fuel amounted to around 30 gigaton in 2011 (of which 8 gigaton was pure carbon). When such quantities are emitted for decades it accumulates in the atmosphere and causes global warming. Since the pre-industrial era the amount of carbon dioxide in the atmosphere has increased by 40% and methane (CH4) has increased by 160%. See the development since 1980 ‘here’. Other anthropogenic greenhouse gases without carbon adds to the warming problem. The average global temperature has increased about 0.8°C since 1880 and two-thirds of the warming has occurred since 1975 (see ‘here’).

The urgent question is this: When will feedback loops of melting and ‘darkening ice caps‘, melting permafrost releasing methane, weakened rainforests, coral reefs and other ecosystems, increasing methane leaks from warmed up wetlands, landfills, etc., when will all this accelerate and cause irreversible climate change and dramatic sea level rise?

Next month ‘The Fifth Assessment Report‘ of Intergovernmental Panel on Climate Change (IPPC) will be published..

Additional information on greenhouse gases: http://www.esrl.noaa.gov/gmd/aggi/
and (in Danish): http://www.global-klima.org/Kap%202/s2_3c.html#