The diagram below shows the per capita CO2 Emissions from fossil fuels (without bunker fuels) and cement production since 2000. Emissions in 2012, 2013 and 2014 are preliminary estimates. The total French CO2 Emissions 2014 (preliminary) was 21% below the 2005-level. The next diagram shows the relative per capita Climate Debt since 2005 of France, Canada, Belgium, Switzerland and Algeria, with the world average set at 100. In real money the accumulated total French Climate Debt increased from $44 billion in 2010 to $76 billion by January 2016 (see the ‘Ranking’). The diagram below shows the development of GDP(ppp-$) since 2000, of the same group of countries and world average. 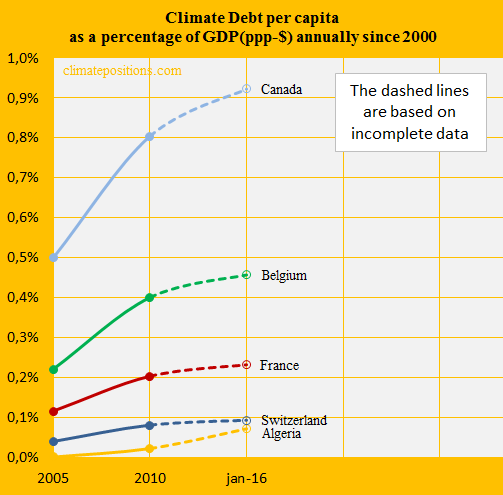 A hypothetical example: Had France reduced Nuclear Power generation since 2005 at the same rate as CO2 Emissions, then the Climate Debt would have been reduced by $5 billion (7% reduction).