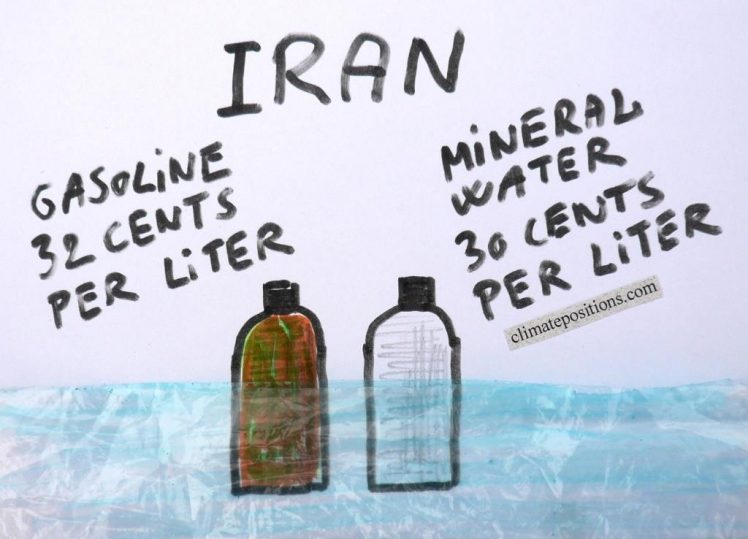 The first diagram shows Iran’s per capita CO2 Emissions from fossil fuels (without bunker fuels) and cement production in decades in comparison with the world average. CO2 Emissions since 2012 are preliminary estimates. From 4.4 tons in the 1990s the level increased to 7.0 tons on average between 2000 and 2014 (preliminary). The green bars are the Climate Debt Free Level in ClimatePositions, determined by the level of emissions in the 1990s and a number of continuously updated ‘Indicators’. Iran was probably the world’s 7th largest CO2 emitter in 2014 (8th largest in 2011).

The diagram below shows Iran’s per capita CO2 Emissions from fossil fuels (without bunker fuels) and cement production since 2000. Emissions in 2012, 2013 and 2014 are preliminary estimates.

Only 5.2% of the Iranian electricity generation was renewable in 2012 and as little as 0.9% of the total energy production was renewable (Btu). According to ‘Middle East Institute’ (January 2016) natural gas and petroleum supplies around 98% of Iran’s total energy demand and the remaining comes from hydropower, nuclear power, biofuels and other renewable. Fossil fuels for individual consumption are still heavily subsidized and the price of gasoline is nearly the same as for mineral water!

The next diagram shows the per capita Climate Debt since 2005, with the world average set at 100, of Iran, Turkey, Iraq, Egypt and Algeria. In real money the accumulated total Climate Debt of Iran increased from $37 billion in 2010 to $99 billion in January 2016 (see the ‘Ranking’). 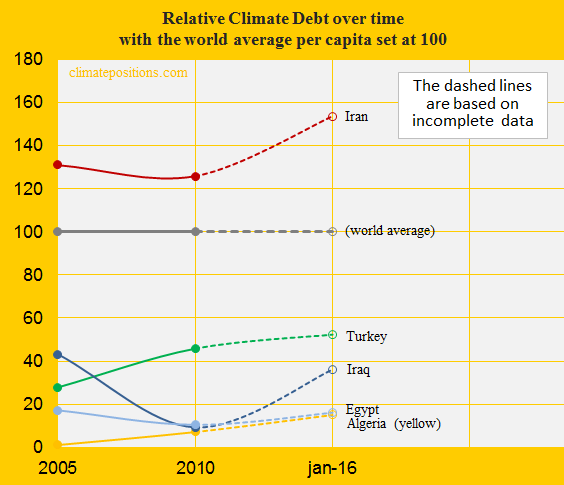 The diagram below shows the development of GDP(ppp-$) since 2000, in comparison with the same four countries and the world average. The ‘UN sanctions‘ from 2006 to January 2016 has been a burden on Iran’s economy. 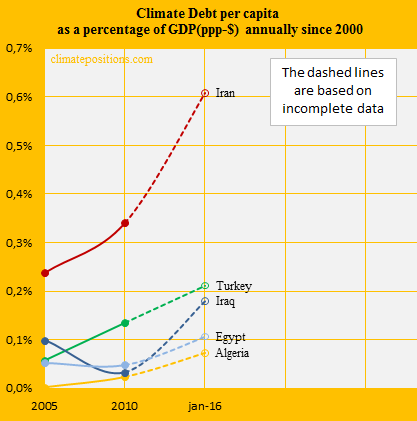 A hypothetical example: Had Iran remained at the same level of CO2 Emissions per capita as in the 1990s (4.4 ton), then the total accumulated Climate Debt would have been reduced by $73 billion (74% reduction).

Drawing by Claus Andersen, 2016 (‘Middle East Institute’: “At around 32 cents per liter, the price of gasoline is near that of a bottle of mineral water in Iran”)