The first diagram shows Germany’s per capita CO2 Emissions from fossil fuels (without bunker fuels) and cement production in decades in comparison with the world average. CO2 Emissions since 2012 are preliminary estimates. The green bars are the Contribution Free Level, determined by the level of CO2 Emissions in the 1990s and a number of continuously updated ‘Indicators’.  The German reductions since 1990s are much too slow.

The diagram below shows the per capita CO2 Emissions from fossil fuels (without bunker fuels) and cement production since 2000. CO2 Emissions in 2012, 2013 and 2014 are preliminary estimates. The average emissions between 2010 and 2014 (preliminary) were 4% higher than in 2009.

In 2006 Germany was the world’s 4th largest Nuclear Power generator (after the United States and France) and in 2014 it was 7th (surpassed by Russia, South Korea, China and Canada). The diagram below shows the German per capita generation since 2000 in comparison with the United States. The diagram below shows the development of GDP(ppp-$) since 2000, in comparison with the United States, Japan, Russia, China and the world average. 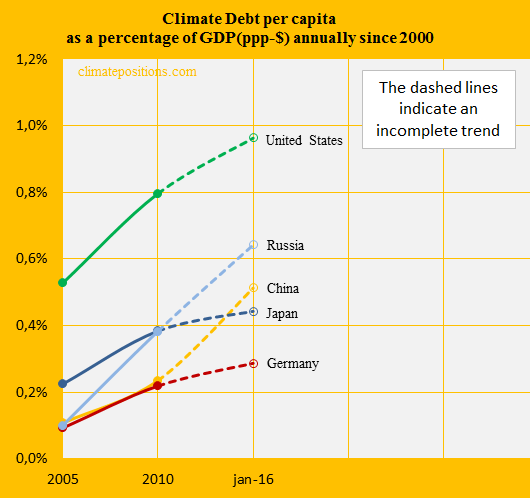 ¹Climate Debts of Luxembourg ($12.505 per capita) and Malta ($862 per capita) are calculated with ‘Indicator’ values of Ecological Footprint set at Belgium and Italian values, respectively.

A hypothetical example: Had Germany shout down Nuclear Power generation completely in 2000, then the current Climate Debt would have been reduced by 25%, and the ‘Ranking’ would have improved from 26th to 34th.