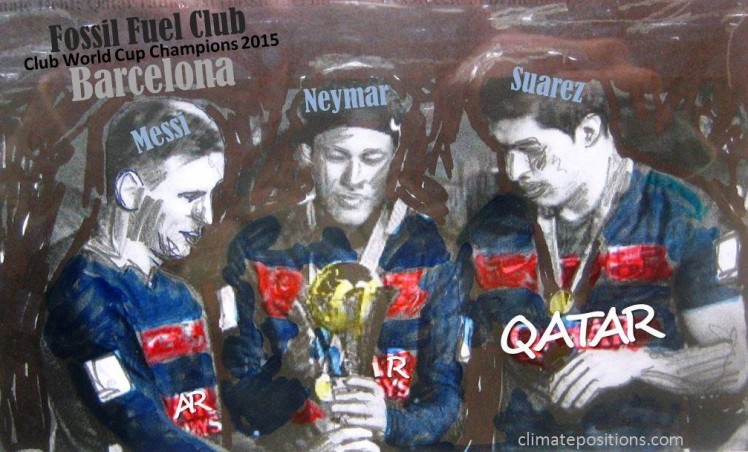 According to the 2015-pledges (INDCs) “Qatar is a developing country” and consequently the international measures and policies shall ensure “eligibility for finance, technology transfer and capacity building.” In other words: Qatar expects developed countries to pay for its climate change mitigation technology transfer etc. Qatar also shamelessly claims to have been “contributing indirectly to the global efforts to mitigate climate change by exporting liquefied natural gas as a clean energy.” What is not said is that Qatar’s oil production has doubled since 2003, while the natural gas production has five doubled. Obviously, the motive is not mitigating climate change, but solely profit. This is backed by a ‘2015-study in the journal Nature’ (read this ‘article’ from The Guardian) suggesting that 61% of all known extractable gas reserves in Middle East (49% globally) and 38% of all known oil reserves (33% globally) – will have to stay in ground beyond 2010 if global warming are to be limited to 2°C.

Qatar’s per capita CO2 Emissions from fossil fuels are more than tenfold the global average. The diagram below shows the emissions (without bunker fuels) since 2000; emissions from 2013 and 2014 are preliminary estimates. The green bars are the Contribution Free Level. It can be added that none of the Qatari energy production is yet renewable – none.

The self-claimed developing country Qatar is the wealthiest nation on Earth. The diagram below shows the per capita GDP(ppp-$) since 2000 of Qatar and the four countries with the largest per capita Climate Debt, respectively, in North America (United States), South America (Venezuela), Europe (Norway) and Asia (South Korea), and the world average. It can be added that none of the extreme Qatari prosperity (and Climate Debt) has yet been deposited as climate change financing² to genuine developing countries suffering the most from climate change – none.

In the authoritarian Muslim country of Qatar, all mentionable companies’ and activities are of couse state-controlled and more or less subsidized by fossil fuel revenue. The success of e.g. Qatar Airlines is depending on cheap fuels and free greenhouse gas emissions and thus destruction of the climate worldwide. Part of the money saved on climate change financing, technology transfer and the postponed shift to renewable energy, Qatar spends on high-profile branding on e.g. ‘FC Barcelona’ (Club World Champions in football/soccer 2015), ‘Men’s Handball World Championship 2015’ and hosting ‘Men’s Football World Cup 2018’ (World Championship in soccer). In addition, Qatar Sports Investments in 2011 became the majority shareholder of ‘Paris Saint-Germain F.C.‘ and many Qatari national teams are dominated by imported top players e.g. the handball-team that won the silver medal at Handball World Championship 2015. Read this article seen from a Qatari viewpoint: ‘Handball: A historical achievement‘. Ambitious and talented athletes have gathered around colorless money since dawn.

A hypothetical example: If Qatar paid its Climate Debt of $113 Billion (or $69 per tons CO2 emitted nationally from fossil fuels (without bunkers) between 2000 and 2014) to a fictive Climate Fund, then the country would be free of Climate Debt and thus qualify for financial support from the fund.