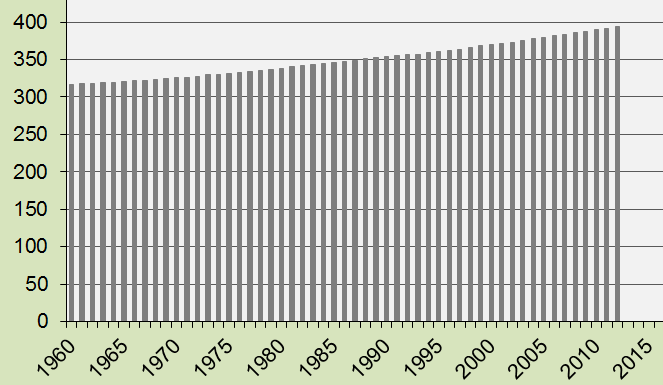 The diagram shows the concentration of CO2 (carbon dioxide) in the atmosphere as parts per million (ppm) 1960-2012. In 1960 the figure was 317 ppm and in 2012 it was 394 ppm. The annually updated figure is included in the latest version of ClimatePositions with impact on the national Climate Contributions.

A hypothetical example: If the CO2 Content in the atmosphere had been at the 1960 level until today, the target for national CO2 Emissions in ClimatePositions would have been 3.5 tons per capita in 2024, instead of the present 2.8 tons. In terms of Climate Contributions it means that for example China (the worlds largest CO2 Emitter) would have saved 21 billion US$ in total Contribution (debt).

Data sources on CO2 in the atmosphere are from NOAA Earth System Researth Laboratory (links in the menu “Calculations”).