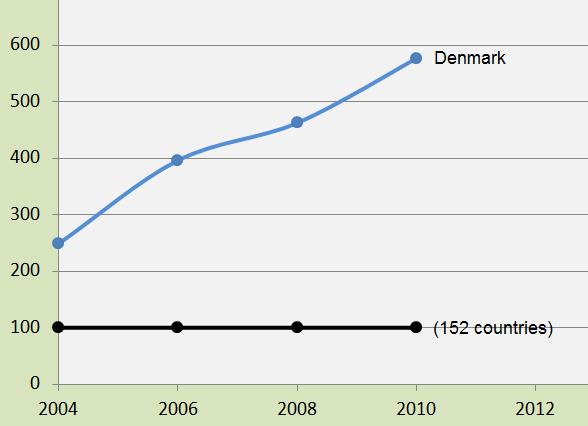 Denmark did well according to ClimatePositions until 2002, where the Climate Contribution (climate debt) was $0, but under the liberal-conservative government 2001-2011 the performance deteriorated. Denmark was the 55th worst performing country out of 145 in 2005 and the 33rd in 2010.

The diagram shows Denmark’s Ecological Footprint, excluding CO2 Emissions, in 2004-2010, in comparison with the global average set at 100 (152 countries included).

A hypothetical example: If Denmark’s Ecological Footprint (excluding CO2 Emissions) in 2004-2010 had been two times larger than the global average instead of four times, the country would have been the 45th worst performer in 2010 instead of the 33rd. The reduction in total Contribution (climate debt) would have been 1.5 billion US$.