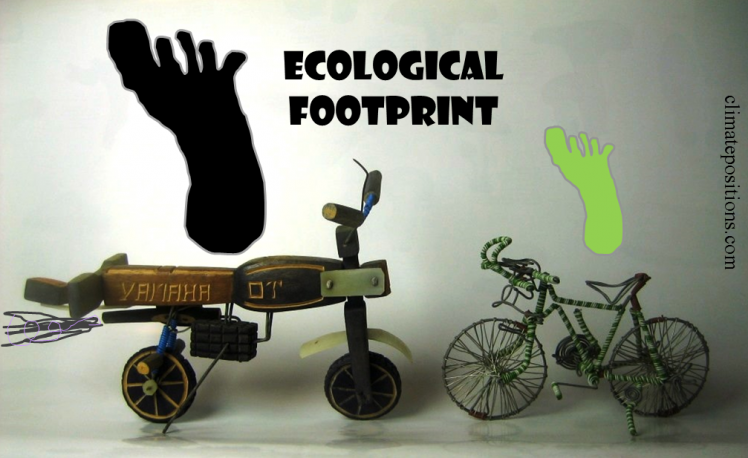 Recently ‘Living Planet Report 2014’ was released by WWF. In addition to the evaluation of the earth’s ecological condition the report of 180 pages presents a new ranking of 152 countries’ Ecological Footprint per capita (pdf p 157). See the ranking in ‘graphics’. The Ecological Footprint by country is calculated by ‘Global Footprint Network’ (in collaborations with governments in order to improve data and methodology¹).

The standardized unit used in the Ecological Footprint is a global hectare (gha) expressing the world’s average biological productive capacity (biocapacity) of land and water, in a given year. Actual areas are converted into global hectares using equivalence factors, which seek to account for the differences. The Ecological Footprint includes only aspects of resource consumption and production of waste for which the earth has regenerative capacity and where data exists. For example, toxic releases are not included. In other words, the footprint solely focuses on the competition for the available biocapacity. Two examples of how this works: 1) A ten-hectare per person Ecological Footprint means that an average person in that country uses all of the services produced in a year by ten hectares of world-average productive land (this land does not need to be within the borders), and 2) Resources used for producing a motorcycle or a bicycle that is manufactured in the United States, but sold and used in Denmark, will contribute to the Ecological Footprint in Denmark (not in the United States).

The indicators in the Ecological Footprint are divided into six categories:

The percentage of each category for the 152 countries is available in the report. On a global scale the carbon footprint accounts for 53% of the Ecological Footprint. Since the available data and methodology have changed over time, comparisons with previous rankings should be done with great caution. However, estimates over the last 50 years, suggest that:

In ClimatePositions the national Ecological Footprints are divided into two: a) carbon³, and b) the five other categories (= the indicator termed “Ecological Footprint excluding carbon emissions”). Read more about the indicators ‘here’. Since the national data-values of the six categories produced by Global Footprint Network and WWF are publicly inaccessible unless paying a fee, the data-source of ClimatePositions is the published and free ‘graphics’. The table below shows the relative Ecological Footprint excluding carbon emissions, of 155 countries, in the five Living Planet Reports between 2006 and 2014. All years the average country is set at 10 (this is not the same as the world average per person). Denmark has topped the below list since 2010. Note that the data year is a few years prior to the Living Planet Report release year, and that much of the raw data is based on self-reporting by individual countries, which contribute to implausible footprint estimates or abrupt year-to-year changes.

¹Standards are established by the Global Footprint Network Standards Committee, composed of scientists and practitioners from around the world. The methodological development of the national Ecological Footprints is overseen by a formal review committee.

³The data-source of national CO2 Emissions per capita for ClimatePositions is ‘EIA‘.

Top image by Claus Andersen, 2014 (motorcycle and bicycle are from Mozambique).