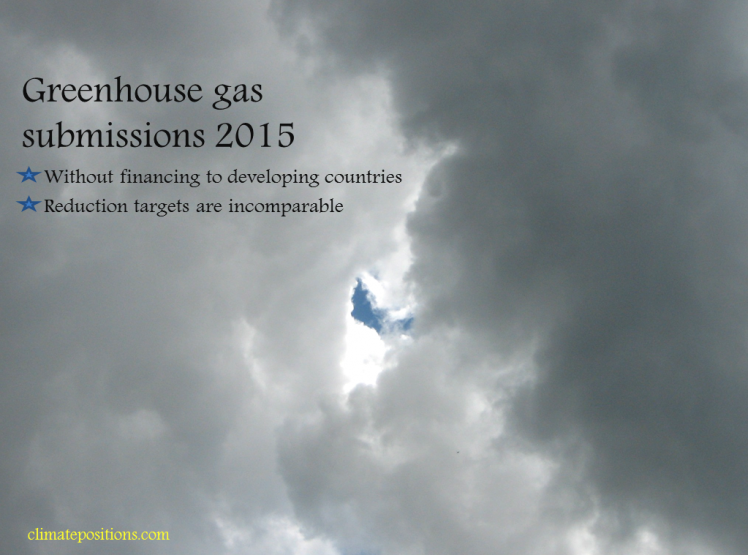 In 2013, on the road to COP-21 in Paris in November 2015, the vision of the United States was as follows: All parties should design “their own commitments to be consistent with their circumstances and capabilities.” The submissions should include “clarifying information (…) in a simple format that is easy for a reader to understand.” (read this ‘article’). Indeed, the simplified clarifications do help the reader to understand the overwhelming carefulness for future generations! … While the worst case climate scenario from the first IPCC report in 1992 is materializing.

This is what the United States, the European Union and Russia intends to do:

In the United States (as an example) more than 90% of all greenhouse gas emissions come from the combustion of fossil fuels1. Let us as an experiment replace “greenhouse gases” with “CO2 Emissions from fossil fuels” in the submissions; then the reduction targets are clarified in a far more disturbing manner:

The diagram below visualizes the disturbing picture described above. The dots mark the reference-years in the calculations. If reductions of other greenhouse gases than CO2 from fossil fuels are prioritized, then the stippled lines will turn more horizontal.

All three parties are responsible for immense proportions of the global CO2 Emissions prior to 1990. See this ‘interactive graphics’ from The Guardian showing the world’s top 20 emitters of carbon dioxide (from fossil fuels and cement) in the past, present and future.

Photo of sky with text by Claus Andersen, 2015.