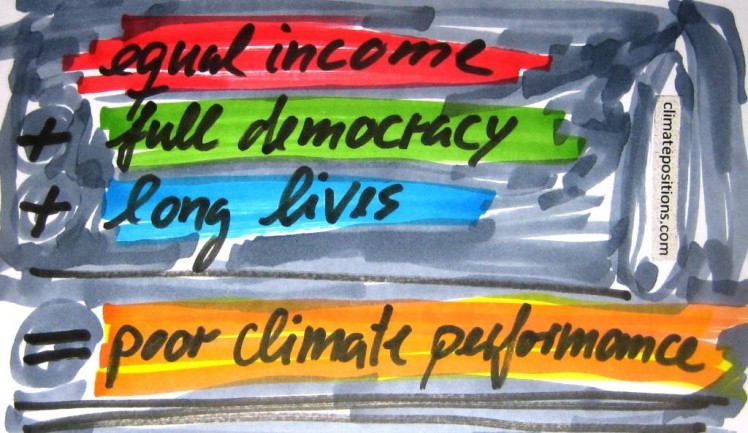 The trend is clear and disturbing in terms of human development: Contribution Free countries have greater Income Inequality, lower Life Expectancy and tend to be Authoritarian Regimes rather than Full Democracies. Conversely, countries with Climate Contributions (debt) have greater Income Equality, longer Life Expectancy, more Full Democracies and fewer Authoritarian Regimes. The 20 countries with the largest Climate Contributions follow the same pattern only more significant (see the table). The statistic says nothing about what is causing what – or what defines the good life.

The world is still waiting for the first Contribution Free country with Income Inequality under 7.0, Life Expectancy over 70 years and Full Democracy. The following 7 countries could be first on the podium just by paying their full Climate Contributions (climate debt) to a Global Fund (non-existent): Sweden, Czech Republic, Germany, Japan, Austria, Finland and Norway. Paying as a group the Global Fund would to a start hold $313 billion (update 2010). Costa Rica is on the other hand Contribution Free and passes on all parameters except a hideously large Income Inequality. Romania is also doing well but has a problem with a Flawed Democracy.

Below are the 123 countries ranked by Income Equality. The list read as follows: In Japan the 10% wealthiest residents have an income 4.5 times larger than the 10% poorest, the Life Expectancy is 83.9 years, the Climate Contribution (debt) is $1,429 per capita and the governance is Full Democracy (nothing mentioned means Flawed Democracy or Hybrid Regime).

Data on income equality is from Wikipedia (links in the menu “Calculations”).

Data on Life expectancy at birth is from Central Intelligence Agency (The World Factbook) (links in the menu “Calculations”).