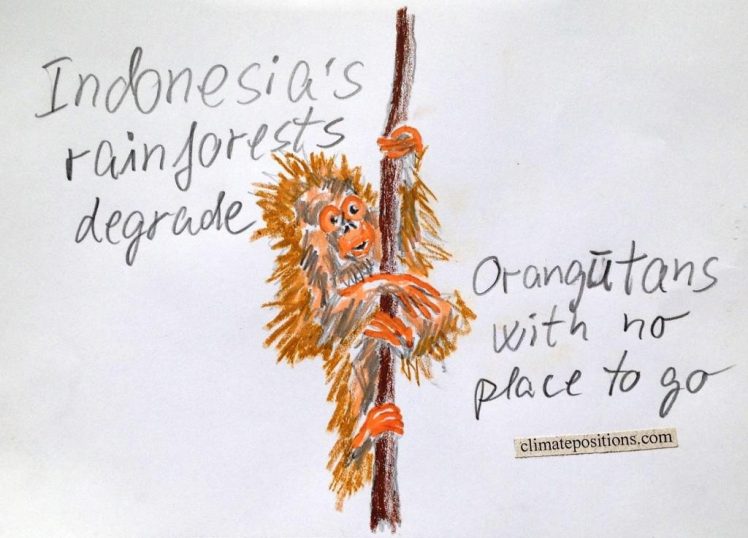 The first diagram shows Indonesia’s per capita CO2 Emissions from fossil fuels (without bunker fuels) and cement production in decades in comparison with the world average. CO2 Emissions since 2012 are preliminary estimates. The green bars are the Climate Debt Free Level, determined by the level of CO2 Emissions in the 1990s and a number of continuously updated ‘indicators’. The Indonesian CO2 Emissions accounted for 1.6% of the world’s CO2 Emissions in 2011 and 1.8% in 2014 (preliminary).

The next diagram shows the per capita CO2 Emissions from fossil fuels (without bunker fuels) and cement production since 2000. CO2 Emissions in 2012, 2013 and 2014 are preliminary estimates. The Climate Debt Free Level (the green bars) increases from 1.0 tons in 2000 to 2.1 tons by 2019. However, the actual Indonesian increase-rate so far is considerably higher. 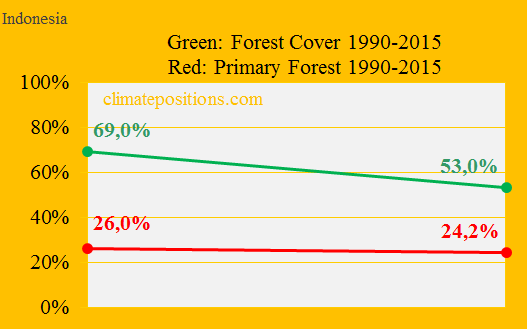 Primary Forest is defined as naturally regenerated forest of native species, where there are no clearly visible indications of human activities and the ecological processes are not significantly disturbed. Nevertheless, the map below from ‘fires.globalforestwatch.org’ displays the locations of Primary Forests separated into two categories: 1) Intact (dark green), and 2) Degraded (light green). This indicates an even more catastrophic loss of world heritage rainforests than the overall figures show.

The high frequency of seasonal forest fires in Indonesia is mostly caused by the forest clearance method called “slash and burn”, where land is set on fire to clear it for new planting. Much of the cleared land is drained carbon-rich peat soil which is highly flammable, and the fires are easily spread and difficult to stop – peat soil can burn meters underground (30% of Indonesia’s forests are peatland). According to World Resources Institute more than a third of the fires in Sumatra are occurring on pulpwood concessions and a good proportion of the rest are on or near land used by palm oil producers (sources: ‘The Guardian’ and ‘voanews.com’). Indonesia is the world’s largest producer of pulpwood, timber and palm oil (source: ‘The Guardian’).

The Coral Triangle is a triangular area of tropical marine waters of Indonesia, Malaysia, Papua New Guinea, Philippines, Solomon Islands and Timor-Leste, which is recognized as the global center of marine biodiversity and a global priority for conservation. Read this statement about one marine area protected back in 2007, at ‘Natuna Islands’ (quote from ‘blog.conservation.org‘):

“… so far this [protected area] has no established management — there is no staff to patrol the park, no designation of which areas can be used for which activities, or allocated budgets to ensure the waters are actually being protected. In fact, an in-depth marine assessment had never been conducted around the Natuna Islands [..]. What we found revealed the precarious state of the environment in this isolated part of the world: highly dependent fishing communities, dwindling fish populations and a slew of pressures that are negatively impacting the quality of these waters and raising concern for the future of the local communities that rely on them. Here are some of our major findings: Fish biomass and coral cover have both steadily declined since 2004. The average percentage of hard coral cover within the sites surveyed was 23%, a less than ideal level. As we dived amongst charismatic species like sea turtles [..] we saw clear evidence of coral bleaching and rubble indicating coral reef degradation. With external pressure such as overfishing and sedimentation from development, the coral reefs surrounding Natuna are under extreme pressure from unsustainable practices like overfishing, bomb fishing, trash and urban growth. Only 1% of fish surveyed were longer than 30 centimeters (12 inches). This signifies that fish populations are not reaching maturity — possibly due to overfishing activities, the sharp decline in overall marine health or improper fisheries management. Without an intervention, it is likely that these sites will continue to degrade.”

Due to overfishing, destructive fishing methods, coastal development, pollution and climate change 19% of the world’s coral reefs have already disappeared and scientists consider approximately 75% of the remaining reefs to be threatened, a number that is projected to increase to 90% by 2050 if the negative development continues (source: ‘blog.conservation.org‘).

The last diagram shows Indonesia’s development of GDP(ppp-$) per capita since 2000, in comparison with other Coral Triangle countries: Malaysia, Philippines, Papua New Guinea, Timor-Leste, and the world average. Ecosystems account for about 21% of Indonesia’s GDP (source: ‘ran.org’).

Palm oil and wildfires: ’https://www.theguardian.com/environment/2016/may/25/indonesia-refuses-palm-oil-permits-in-anti-haze-push‘ (May 2016).