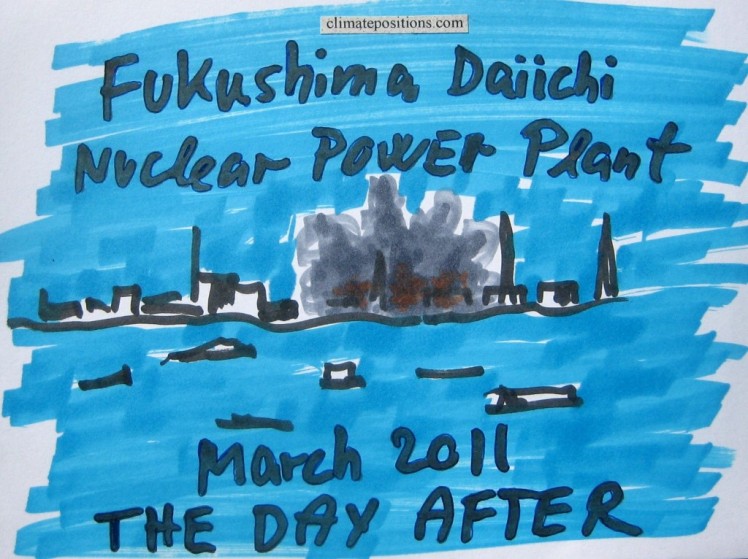 Not only does the generation produce dangerous radioactive waste to deal with for thousands of future generations (10,000 to 250,000 years), it also causes catastrophic disasters¹ with extremely dangerous nuclear radiation, causing death, birth defects and cancer amoung people, poison agricultural land, and otherwise damage the environment for many generations. In ClimatePositions Nuclear Power is not accepted as a national CO2 Emission reduction instrument and consequently the generation must be phased out parallel to the reductions in CO2 Emissions. See a graphic presentation of the calculation method ‘here’. Below are ranked the 31 Nuclear Power countries (Lithuania wisely shut down in 2010) with the largest Nuclear Power generation in 2013 first. The 2013-ranking of nuclear generation per capita is shown in brackets (Sweden is ranked first). Note that the United States and France are responsible of 51% of the global generation and only eight countries are responsible of 79%. These eight countries emitted 57% of the global CO2 Emissions (in 2006-2010) and they were responsible of 65% of the global Climate Contribution (climate debt) in 2010. Nuclear Power combined with continuously large CO2 Emissions is a nasty cocktail.

So, how did the Nuclear Power countries respond to the Japanese disaster in 2011? The table below shows the changes in generation per capita from 2010 to 2013. Japan tops the list – surprise! The Japanese reductions in Nuclear Power generation in 2011-2013 has saved the country of $7.2 billion in climate debt in ClimatePositions 2014. In the bottom Sweden has advanced its leading position in the irresponsible radioactive league.

Drawing of Fukushima Daiichi Nuclear Power Plant (smoke comming up the day after the disaster) by Claus Andersen 2014.