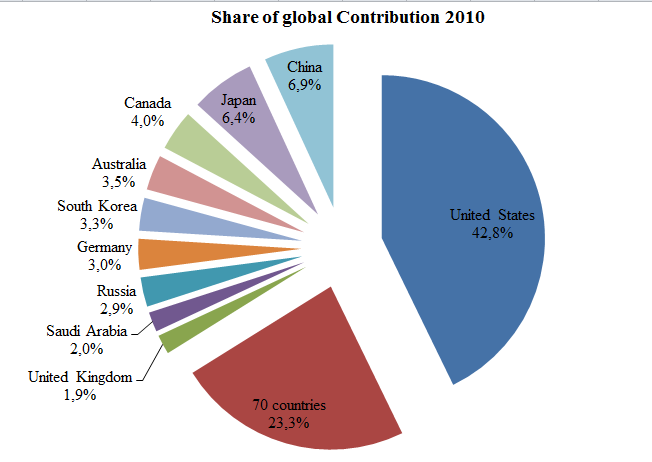 In ClimatePositions 2010 the United States must contribute 43% and China 7% of a fictive Global Climate Fund (fictive because all appropriate initiatives have been undermined by the United States). The corresponding figures in 2005 were 47% and 3% – outsourcing of CO2 Emissions (moving abroad the dirty productions for domestic markets in the United States¹) keep the climate change top tuned. The remaining 50% of the global Climate Contribution (climate debt) is to be shared between 78 out of 145 countries. See the shares of Climate Contributions (climate debt) of the top ten contributors in the diagram and the ranking of all 145 countries in the menu “Contributions”.

The COP Summits have proven one thing: The policies of United States do not demonstrate genuine care for future generations.

¹ ClimatePositions include a range of indicators in the calculation of the national Climate Contributions (read ‘here‘).