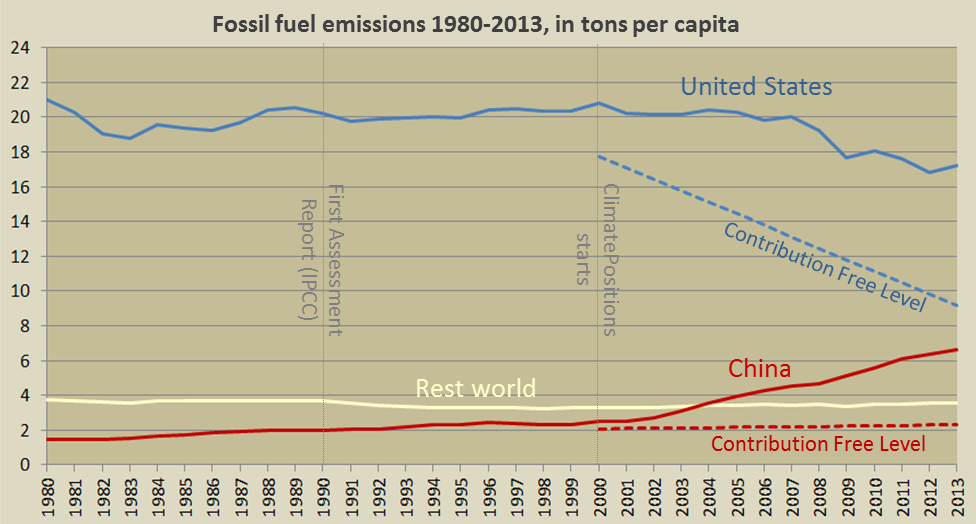 As it shows, the relatively poor China could have increased per capita emissions slightly since 1990s and still be Contribution Free (8% increase by 2020 compared to 1990s is considered acceptable). However, the Chinese increase rate has been appallingly high since 2002. The reduction rate since 2005 of the rich United States has been way too little and especially too late (74% reduction by 2020 compared to 1990s is considered acceptable). Note that the average per capita emissions of Rest World is about unchanged since 1980. The overall ‘global increase of CO2 Emissions’ is largely due to a 21% growth of the global population since 1995. For comparison, the Chinese population growth was only 10% during the same period, due to a harsh birth control, whereas the growth of the United States was 18%.

The table below shows the indicator values and key calculations of China and the United States. The updated indicator values have a direct impact on the Contribution Free Level of CO2 Emissions (the stippled lines in the diagram above) and consequently the size of the Climate Debt. Detailed information is available in the menu’s ‘Calculations (excel)’ and ‘Indicators’.

¹The Climate Debt in ClimatePositions (calculations are available ‘here‘). Climate change funding (deposited) to developing countries has been deducted. See the ‘ranking‘ of world shares.

²While the majority of rich countries with huge per capita emissions of greenhouse gases contribute inexcusably inadequate in the 2015-submissions prior to COP21, then the majority of poor countries with no historic responsibility for the global warming contribute with heartbreaking reduction commitments in comparison with fictional ‘BAU-scenarios‘ (business-as-usual scenarios). A preliminary ‘calculation by Climate Interactive’ indicate that the realization of the present submissions will lead to a global temperature rise of 3.5oC (with a range of uncertainty of 2.1 – 4.6°C) at the end of the century … when todays new-born babies are in their 80s. Read also the article: ‘Giving up on future generations is real (about COP Submissions 2015)‘.

If China’s Environmental Performance had been as high as the one of the United States, then the total accumulated Chinese Climate Debt would have been $528 billion instead of $566 billion – a reduction of $68 billion, or 12%.

First diagram (with words and flags) by Claus Andersen, 2015.