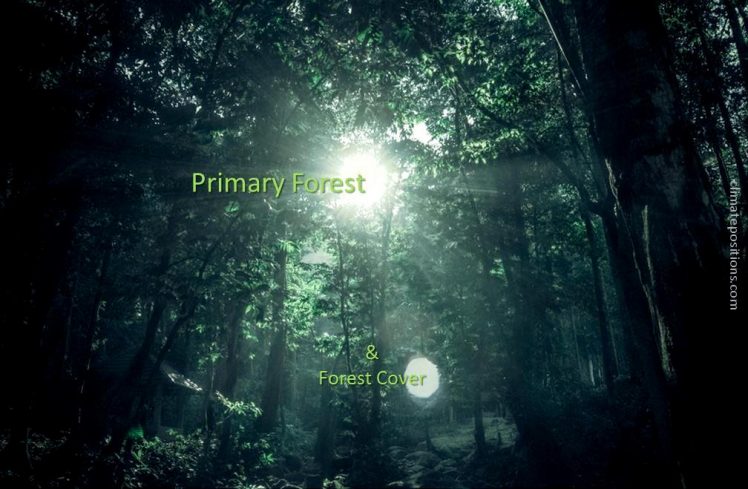 Primary forests are considered irreplaceable with unique qualities that make signiﬁcant contributions to biodiversity, climate change mitigation, and sustainable livelihoods – with particular importance in tropical areas. One study from 2007 found that 25% of all species in Amazonian Brazil were unique to Primary Forests, and almost 60% of all species of tree and liana were recorded only in Primary Forests.

Seven countries accounted for 75% of the reported Primary Forests in 2015: Russia, Canada, Brazil, the Democratic Republic of the Congo, United States, Peru and Indonesia. Tropical countries that reported on their Primary Forests from 1990 to 2015, showed an overall decline of 10% between 1990 and 2015, and subtropical countries reported a decline of 2.5%. These declines were roughly in line with the rates of the overall Forest Cover loss for these domains. The reported increases of Primary Forests in temperate and boreal countries were accounted for almost entirely by Russia (boreal; 0.4% increase rate annually) and the United States (temperate; 0.3% increase rate annually).

82 countries have zero Primary Forests in all reporting years. Some of these countries have substantial Forest Cover, for example Spain, Germany, Greece, the United Kingdom, Angola, Mozambique, Tanzania and Zambia.

The first diagram shows the area change of Forest Cover and Primary Forests as share of the total land area of the 83 countries with Climate Debt. Although this group of countries bear the responsibility for the global warming, the area change of both forest categories is marginal (an increase would have mitigated the warming effects of greenhouse gas emissions). On average 32.7% of the Forest Cover was Primary Forests in 2015. 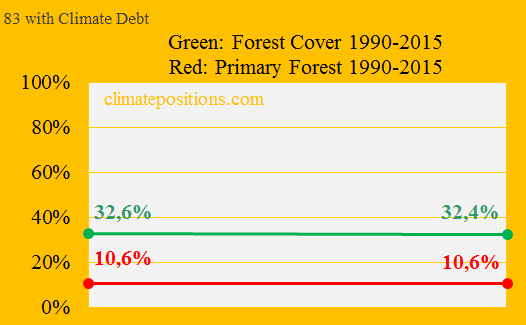 Similar diagrams of 176 countries are available in the menu ‘Calculations (Excel)’. 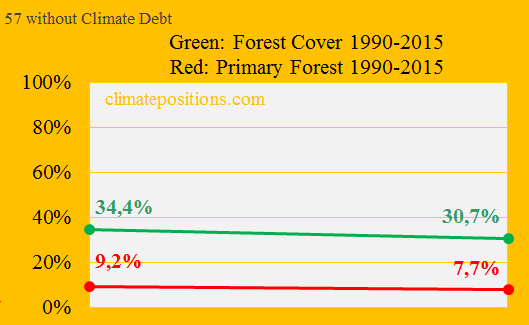 ³Among countries with Climate Debt only France and Dominican Republic are excluded due to lack of data on Primary Forests.

Photo of rainforest is from ‘www.pexels.com/photo‘, 2016.