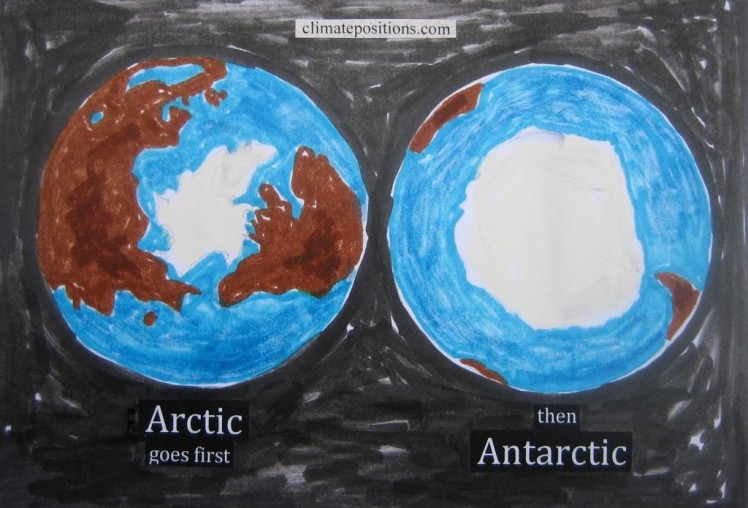 If the current level of emissions proceeds for another sixty years and then drop to zero, then the 2°C global warming is unavoidable (corresponding to 600 GtC of additional carbon release) and the millennial sea level rise from Antarctica (alone) is likely to be about 2 m. The study finds that the West Antarctic Ice Sheet becomes unstable after 600-800 GtC.

With cumulative fossil fuel emissions of 10,000 gigatonnes of carbon (GtC), Antarctica is projected to become almost ice-free with an average contribution to sea level rise of more than 3 m per century during the first millennium. Over the next century Antarctica is projected to contribute very little to the sea level rise, compared to other sources. However, if global warming exceeds the 2°C limit, then the millennial-scale rates of sea level rise are projected to be dominated by ice loss from Antarctica. Read also the article ‘Burning all fossil fuels will melt entire Antarctic ice-sheet, study shows’ from The Guardian. See the NASA video ‘The Arctic and the Antarctic Respond in Opposite Ways’ (1:42 min) and read about the pole-differences ‘here’.

More frequent and more severe extreme weather-events, such as floods, is not an issue for the study, although these events are strongly related to global warming and sea level rise. The recent year’s climate destabilization due to about 1°C warming and 20 cm sea level rise is only a hint of what’s coming. To imply the consequences of 30 m and 60 m sea level rise on coastal and low areas, the maps of fourteen out of the twenty largest cities are shown below. The source is this interactive ‘world map’ from geology.com.