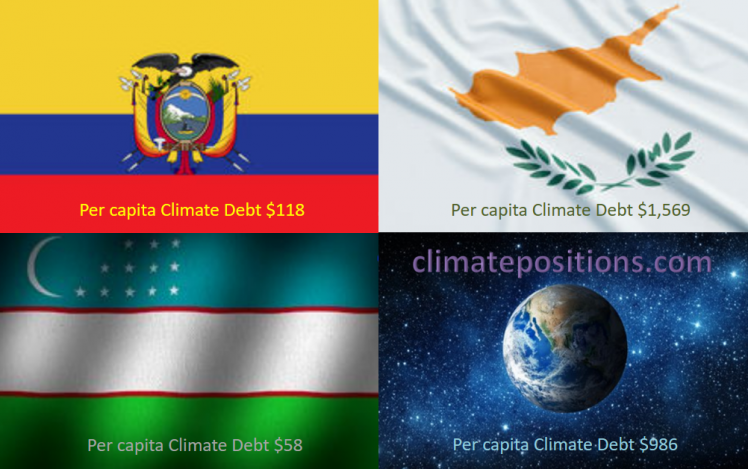 The ‘Per capita Climate Debt‘ accumulated since 2000 of Ecuador, Uzbekistan and Cyprus are $118, $58 and $1,569, respectively. The second diagram shows the trends between 2010 and 2017, with world average set at 100, for the three countries as well as of Equatorial Guinea, Panama and Dominican Republic. The per capita Climate Debt ranking by October 2017 is shown in brackets. 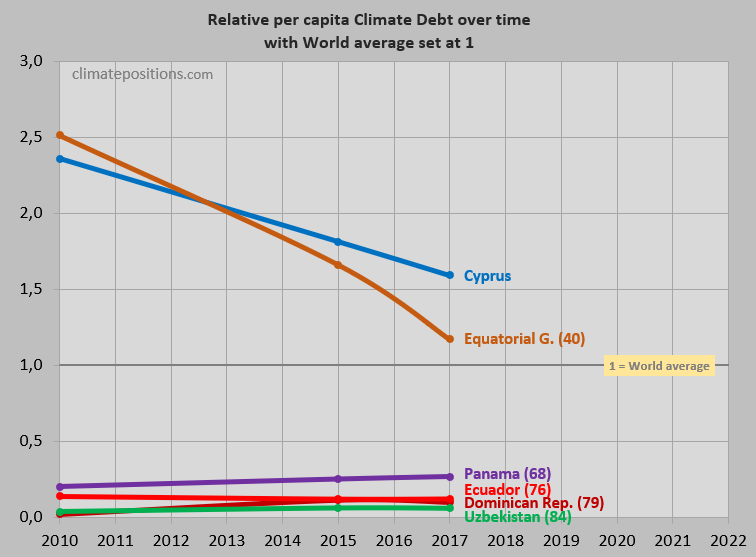 The next three diagrams show Fossil CO2 Emissions from fuels and industrial processes¹, in tons per capita in decades, of Ecuador, Uzbekistan and Cyprus. The green bars show the Free Emission Level² – the exceedance is the basis for calculating the national Climate Debt. The grey bars are World emissions average. 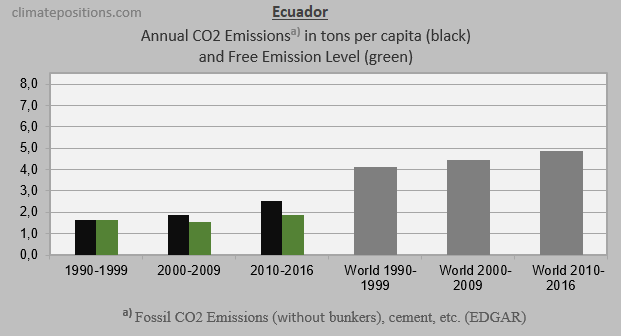 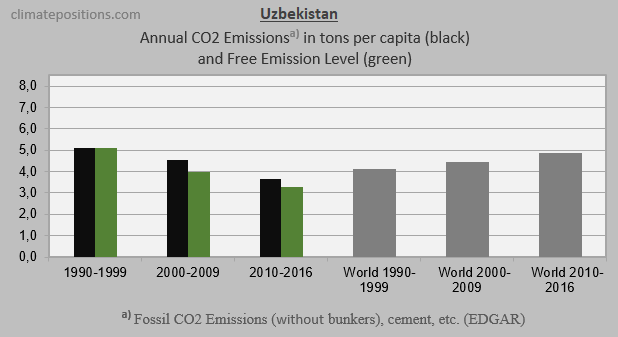 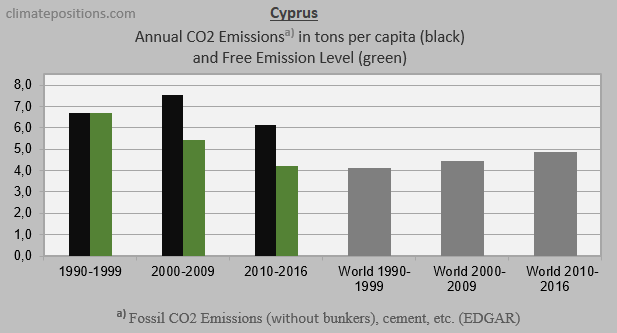 The three diagrams below show the per capita Fossil CO2 Emissions from fuels and industrial processes¹, annually since 2000, of the three countries. The green bars show the Free Emission Level². The emissions reductions of Cyprus between 2009 and 2013 cannot compensate for an overall poor performance. Uzbekistan’s emissions decrease is nearly acceptable, while Ecuador’s increase is somewhat too steep. 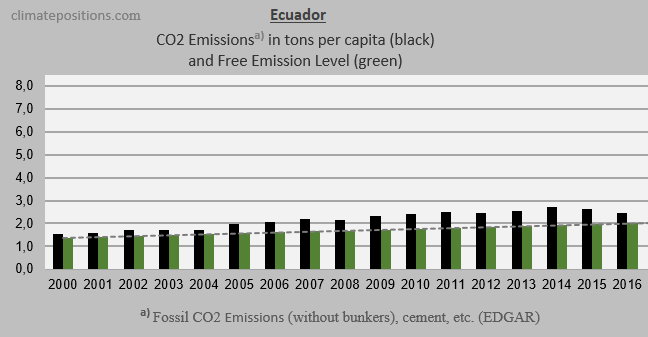 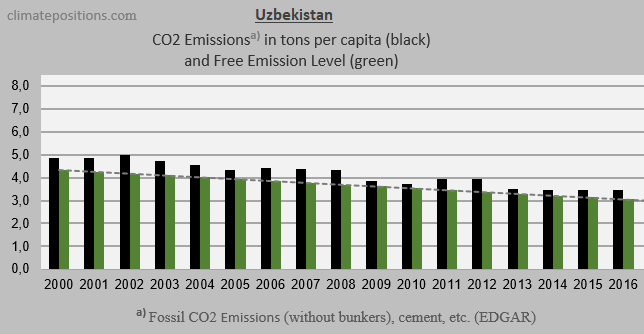 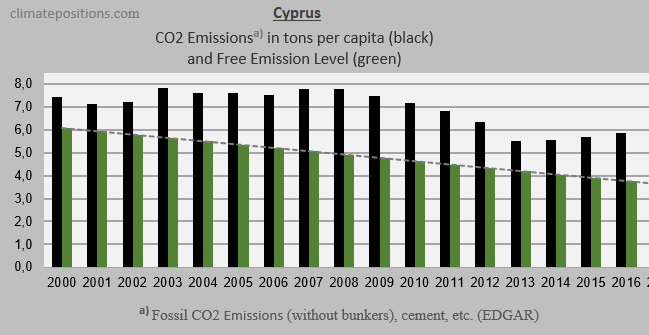 The diagram below shows per capita GDP(ppp-$) of the six countries and the World average. The wealth of Cyprus is 5,0 times greater than the wealth of Uzbekistan. 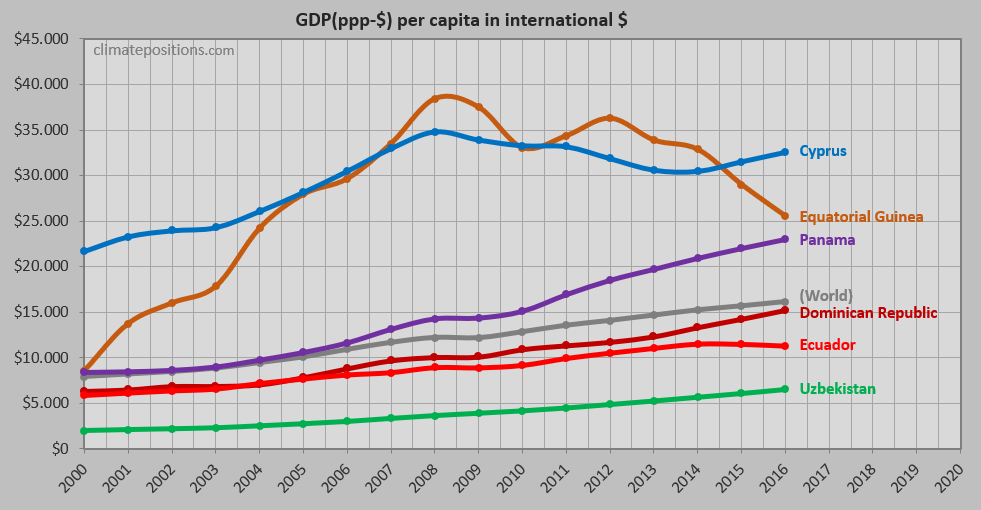 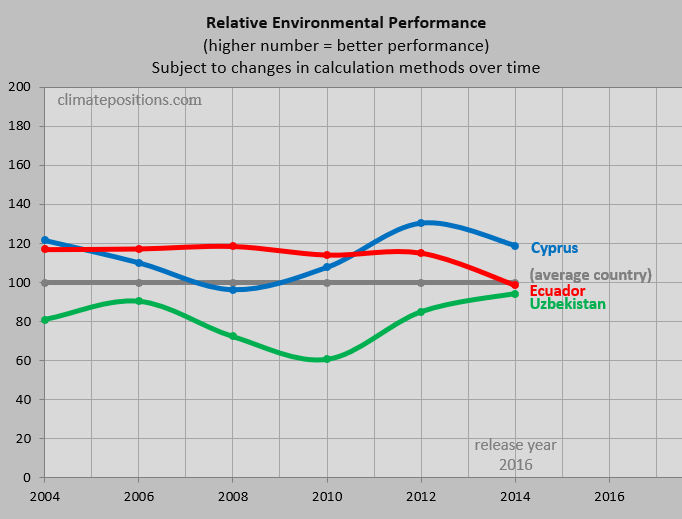 The average per capita Ecological Footprint without carbon, between 2000 and 2013, with an average World country set at 100, of Ecuador, Uzbekistan and Cyprus are 83, 59 and 111, respectively. Release years are about four years after data years. Note that footprint calculation methods have changed over time. The latest and historic details from the source are available here: ‘Ecuador‘, ‘Uzbekistan‘ and ‘Cyprus‘.

Forest Cover and the precious Primary Forests as percentage of total land area, in 1990 and 2015, are important indicators in ClimatePositions. Cyprus and Uzbekistan have nearly stable forests, while Ecuador’s forests declined significantly, causing 43.1% of the Climate Debt. 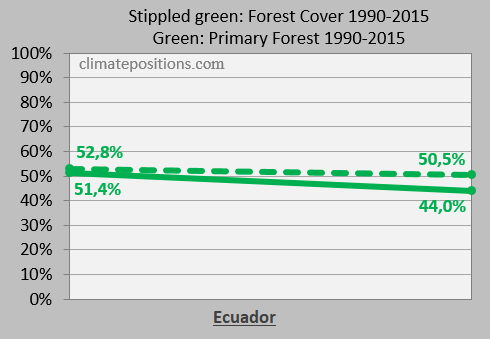 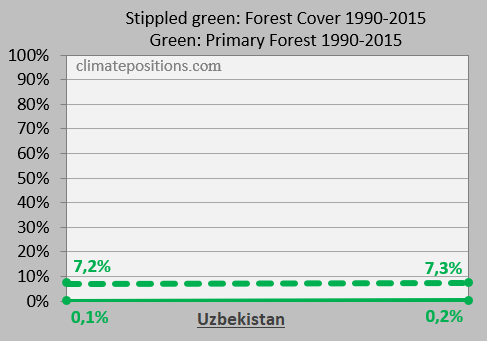 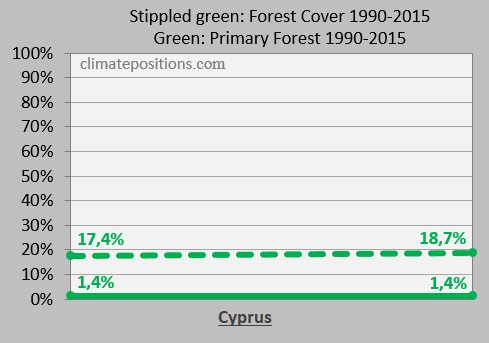 Finally, the table below shows four key values of Ecuador, Uzbekistan, Cyprus, Equatorial Guinea, Panama and Dominican Republic in the calculation of national Climate Debts in ClimatePositions. The price of CO2 per ton (column two) is for total CO2 Emission from Fossil Fuels (without bunkers) and industrial processes. Climate change financing (column three) is from July 2017.