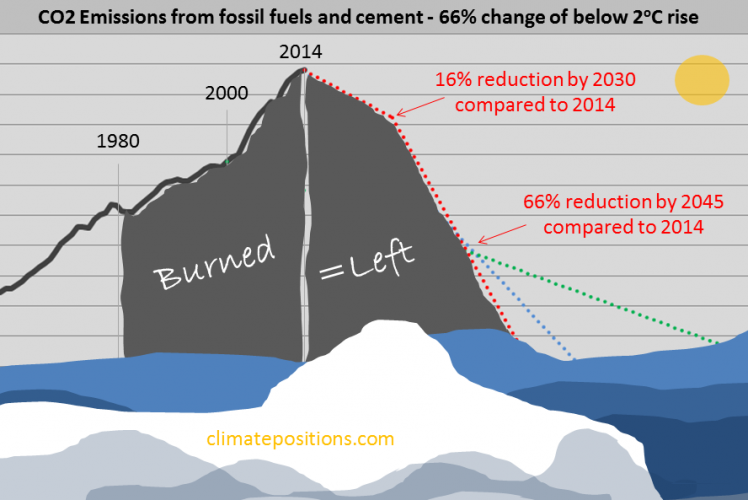 The diagram shows the world’s CO2 Emissions from fossil fuels and cement between 1959 and 2014 (the black line), in million tons of carbon. Note that the included emissions are only a dominant part of all greenhouse gases covered by the submitted pledges (read ‘more’). The stippled lines show four reduction scenarios within the below 2°C carbon budget (with 66% change):

Note that even the last scenario (the grey) is far more optimistic on the period 2014-2030, than the 187 pledges delivers. More comments below the diagram.

The red scenario represent the most super-optimistic, sensational development one can possibly hope for after the Paris Agreement. Since the agreement is essentially an ambitious global warming target (less than 2°C and pursuing 1.5°C) and a complicated standardized framework … without any committing pathways to the target – then the super-optimism will have to be fed by the trust in parallel happenings such as:

The mismatch between aims and means in the Paris Agreement taken into account, the euphoria and self-applause at the end of COP21 is somewhat misplaced.

Read also the unfccc ‘Lima-Paris Action Agenda‘ and the article ‘Giving up on-future generations is real (about COP-submissions 2015)‘.

The ‘Synthesis report (UN)’ on the aggregate effect of the pledges.