The fracking process typically blasts huge quantities of water, mixed with sand and chemicals, deep underground to break apart rocks and allow the natural gas to flow from the shale into the well. See this animated ‘promotional video (6:36)’ from Marathon Oil Corporation (Texas). However, it is beyond any doubt that contamination of drinking water and other alarming environmental problems frequently occur because of fracking. See the video ‘Fracking Hell: The Untold Story. 2011. (17:53)’. The chemicals which could be used amounts to hundreds (see this ‘list’) and a limited number of dangerous chemicals are routinely being used. A ‘study’ of more than 100 studies of shale gas production in the past 10 years (until 2013) concludes that fracking done poorly “can be prone to accidents and leakage, contribute to environmental degradation and induce earthquakes”.

Burning natural gas produces about half the CO2 Emissions as coal per unit of energy. Consequently, replacing coal with natural gas from fracking will reduce CO2 Emissions. This manure partly explains the 10% emission reductions in the United States between 2007 and 2013. However, the life circle of carbon emissions (including methane from drilling leakages and pipelines) from fracking and shale gas distribution is still unknown. If leaking methane is extensive the fracking might harm the climate as coal (read this detailed ‘discussion‘ and this ‘article‘). Add to that some interesting U.S. energy ‘statistics‘ during the fracking boom:

The statistics indicate that fracking in the United States tend to delay the necessary green economy, while slowly reducing CO2 Emissions by phasing out coal. How the fracking boom in North America affects the global energy market and thus the global CO2 Emissions is another matter. The diagram below shows the coal production 2008-2012 of the world, China, the United States, Europe and India. 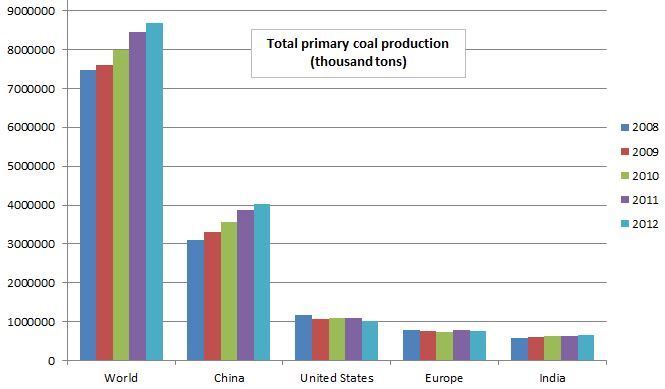 The global coal production increased by 16% from 2008 to 2012 (total CO2 Emissions from energy increased by 10%). Note that the proved reserves of coal represent 113-135 years of production at current levels. According to a recent ‘study’³ from Potsdam Institute for Climate Impact Research fracking will not lead to a reduction of overall greenhouse gas emissions. The argument is this: When natural gas becomes abundant and therefore cheap, it adds to the total energy supply (and consumption) and will only partially replace coal. In other words, the market effect will erase the advantage of lower emissions from the natural gas itself. Although the additional gas supply will partly substitute coal it might also substitute renewable energy. The study concludes that effective climate stabilization can be achieved only through emissions pricing – this requires international political cooperation and binding agreements.

The United States and Canada oppose binding reduction agreements – while the fracking boosts … can you hear the fracking scream?

1Shale gas (gas from fracking) accounted for 39% of all natural gas produced in 2012 in the United States, compared to 15% of that in Canada (‘source’).

³Five research groups from Germany, USA, Austria, Italy and Australia projected what the world might be like in 2050 with and without a natural gas boom. They used five different computer models that included not just energy use and production, but also the broader economy and the climate system. All five research groups reported very little difference in climate change.

A hypothetical example: If the United States had implemented the lower 2012 level of CO2 Emissions due to coal since 2000 and filled the gap with renewable energy, then the cost in climate debt in ClimatePositions would have been reduced by 24% or $411 billion.

Production of coal is from EIA: ‘http://www.eia.gov/cfapps/ipdbproject/IEDIndex3.cfm?tid=1&pid=7&aid=1‘

Article in The Guardian about fracking and economy: ‘http://www.theguardian.com/business/2014/oct/19/oil-price-us-opec-brinkmanship-shale-gas‘

The top image is by Claus Andersen, 2014 (rock found on a beach in Denmark: The fracking scream).