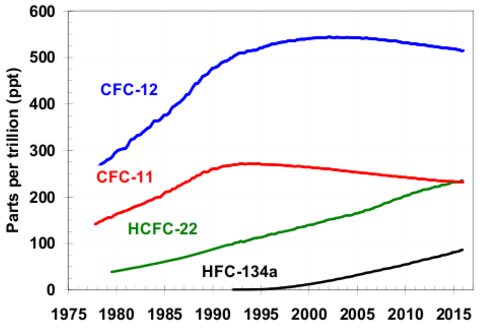 CFC-12 (also called R-12 and Freon-12) and CFC-11 (also called R-11 or Freon-11) are representatives of a family of F-gases with high ozone depletion potential and high Global Warming Potential. CFCs are phased out thanks to the Montreal Protocol from 1987.

HCFC-22 (also called R-22) is a representative of a family of F-gases with lower ozone depletion potential and high Global Warming Potential. CCFCs are phased out in developed countries thanks to the Montreal Protocol from 1987, however, not so in developing countries (for example in India and China air conditioning sales are growing about 20% annually). HCFCs are often used as alternatives to CFCs, because of the relatively lower ozone depletion potential. An enhanced HCFC phase-out plan is incorporated the Kigali Agreement.

HFC-134a (also called R-134a, Forane 134a, Genetron 134a, Florasol 134a or Suva 134a) is a representative of a family of F-gases with very low ozone depletion potential and high global warming potential. HFCs are often substituted for HCFCs because of their lower ozone depleting potential. The Kigali Agreement is a binding phase-out plan on HFCs (for which suitable alternatives are available¹).

The Kigali Agreement HFC phase-out plan goes like this:

In other words, major HFC-emitters like China and India can increase the use of HFCs for another 5-9 years, and then phase-out the following 23 years. According to EU (the Kigagi ‘Earth Negotiations Bulletin’) a 5-year phase-out delay implies a doubling of the annual HFC climate impact by 2030 – currently, HFC-emissions increase by around 10%, annually. Note that it has been known since the 1980’s, that many HFCs are extremely potent greenhouse gases (see this ‘Study’ from 1990).

The climate impact of HFCs depends on the timeframe and the calculation methods. The most commonly used HFCs have short lifetimes in the atmosphere (HFC-134a has a lifetime of around 15 years), however, they are very potent during this short period of time (134a has a 20-year Global Warming Potential (20-year GWP) over 3,000 times that of CO2). IPCCs ‘Fifth Assessment Report‘ lists 39 HFCs (of which only 18 of the most potent are included in the Kigali Agreement) with atmospheric lifetimes ranging from 7 days to nearly 250 years, and 100-year GWPs ranging from less than 1 to over 12,000. According to the same IPCC-report (pdf page 711) the F-gases represented around 2% of the total greenhouse gas emissions in 2010, while HFCs represented about 76% of the F-gases (GWP adjusted emissions). In other words, in 2010 the HFC emissions represented approximately 1.5% of the Global Warming Potential of the total greenhouse gas emissions (100-year GWP).

Puzzlingly, Greenpeace argues on their ‘Site’, that: “…the cumulative CFC, HCFC and HFC pollution now in the atmosphere was directly responsible for 17% of man-made global warming in 2005.” Add to this the showy statement from the Kigagi ‘Earth Negotiations Bulletin’: “…the Kigali Amendment has the potential to avoid up to 0.5°C of warming.” No wonder, that the world press has generally been substantially shallow in their coverage of the Kigali Agreement. The US Secretary of State John Kerry simply said: “It is likely the single most important step we could take at this moment to limit the warming of our planet and limit the warming for generations to come.” (‘The New York Times’).or not the Kigali Agreement is the single most important step we can take at this moment(!?), then it narrows the uncertainties on the necessary Fossil Fuel phase-out timetable, required to meet the Paris Agreement, which commits nations to limiting global warming to 2°C and to pursue efforts to limit it to 1.5°C.

¹The New Climate Economy: ‘Phasing Down the Use of Hydrofluorocarbons (HFCs)’, 2016 (pdf 16 pages), quote (page 7): “About 55% of HFCs used globally in 2010 were in residential, commercial, and industrial refrigeration and air conditioning; another 24% were in mobile (vehicle) air conditioning; 10% in foams; 5% in aerosols; 4% in fire protection systems; and 1% in solvents. Climate-friendly alternatives to high-GWP HFCs are widely and increasingly available for most uses.33 They fall into two basic categories: non-fluorinated substances with low GWPs, and fluorinated substances with low to mid-range GWPs. Commercially available non-fluorinated or “natural refrigerants” include: ammonia, with a GWP of near zero; hydrocarbons (e.g., propane and isobutene), with GWPs of less than 4; and CO2 (with a GWP of 1). Alternative fluorinated substances include the low-GWP HFCs, also known as hydrofluoro-olefins (HFOs), some with GWPs of less than 1, according to the IPCC.”

The New Climate Economy: ‘Phasing Down the Use of Hydrofluorocarbons (HFCs)’, 2016.

Greenpeace: ’HFCs and other F-gases: The Worst Greenhouse Gases You’ve Never Heard Of’.

The Guardian: ‘Kigali deal on HFCs is big step in fighting climate change’.