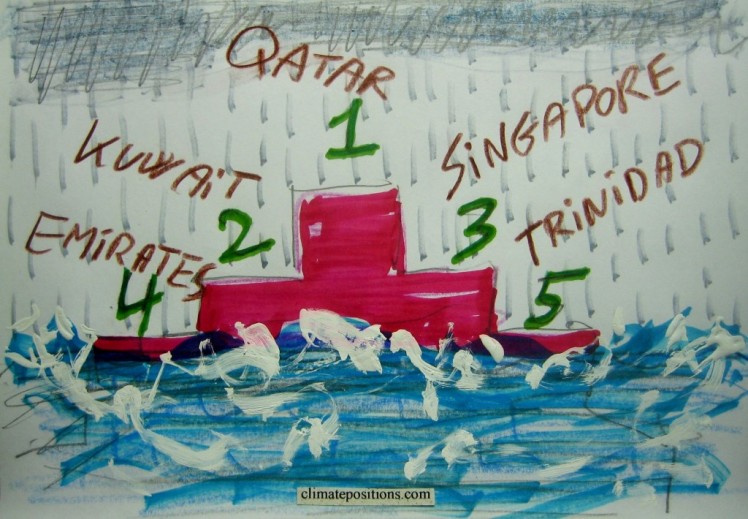 The GDP(ppp-$) per capita since 2000 of the five countries, and the world average, is shown in the diagram below. Trinidad and Tobago stands out among these by being only the 38th wealthiest country in the world; the others are ranked 1st, 4th, 5th and 8th. Note that none of the five countries have contributed with any ‘climate financing’ to developing countries. 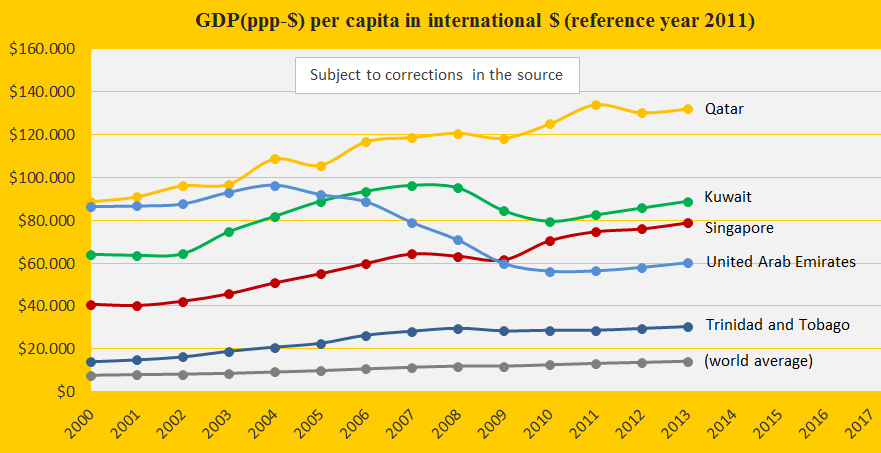 The five diagrams below show the CO2 Emissions per capita in decades of Qatar, Kuwait, Singapore, United Arab Emirates and Trinidad and Tobago, in comparison with the world average (the grey bars). The green bars show the Contribution Free Level in ClimatePositions – the free level is determined by CO2 Emissions in 1990s and a number of updated ‘indicators’. Qatar had the world’s largest per capita emissions in 2012 (among the full data countries in ClimatePositions).

The next five diagrams show the CO2 Emissions per capita 2000-2013 (2013-emissions are preliminary estimates) – the general picture is shocking cynicism towards future generations on the planet. The total amounts of CO2 Emissions exceeded per capita since 2000 is the basis of the calculation of the national Climate Debt.

The diagram below shows the relative Climate Debt per capita since 2005, with the world average set at 100. Qatar’s Climate Debt passed the one of Kuwait around 2011. 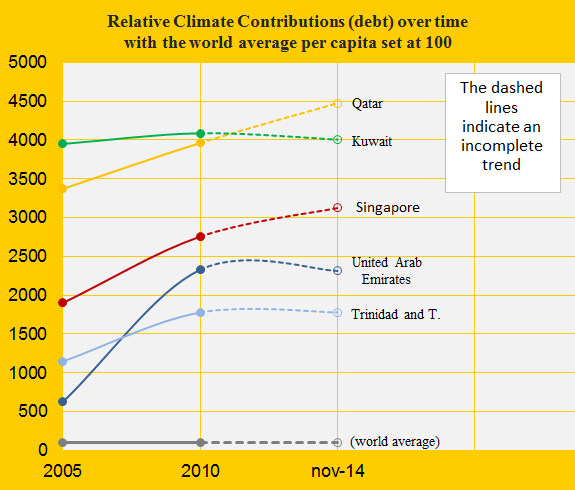 The Climate Debt calculated as percentages of the GDP(ppp-$) annually since 2000 are shown in the diagram below. Using this methodology, Trinidad and Tobago is a sovereign no. 1 among 147 countries (see the ‘ranking’). 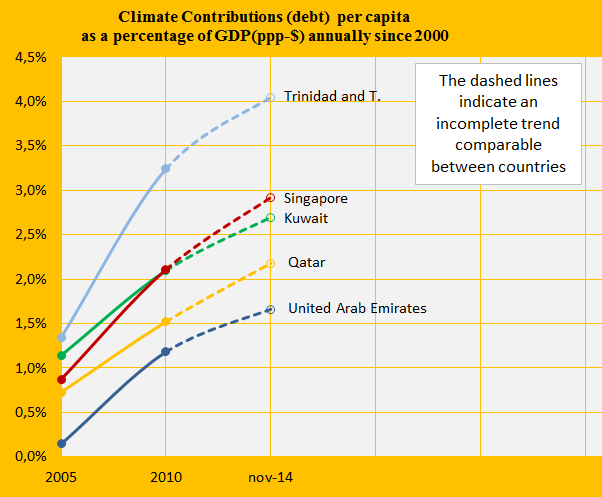 Among the countless dilemmas² in the compilation of national greenhouse gas emissions (causing climate change) are the marine bunkers – deliveries of oils to ships for consumption during international voyages. ‘EIA’ include marine bunkers in its calculation of national energy consumption and corresponding CO2 Emissions from fossil fuels, while ‘IEA’ does not. Since the port of Singapore is no. 1  marine bunkering center in the world (responsible for 21% of all CO2 Emissions from marine bunkers globally¹ in 2011) the various methods of calculation makes a big difference: In 2011 the CO2 Emissions per capita of Singapore, from EIA and IEA, were respectively 39.2 tons (23.3 tons in 1995) and 12.5 tons (11.8 tons in 1995). If IEA’s data were to be used in ClimatePositions instead of EIA’s Singapore’s Climate Debt ranking would drop from 3rd to around 9th (a drop second to none due to Singapore’s unique position). However, here are some counter arguments to consider:

In ClimatePositions the payments of the accumulated national Climate Debt leads to boosted financing of climate and environmental projects worldwide. If Singapore paid it’s Climate Debt of $133 billion (2.9% of the national GDP(ppp-$) annually since 2000), then the country would qualify for allocation of Global Climate Funding to CO2 Emission reduction projects (in a better world than the present!).

Data on preliminary national CO2 Emissions are from Global Carbon Project (links in the menu “Calculations”).

Read about Singapore’s CO2 Emissions (and marine bunkers): ‘LowCarbonSG’ and the history of refinery: ‘Singapore: The Energy Economy 1960-2010‘.