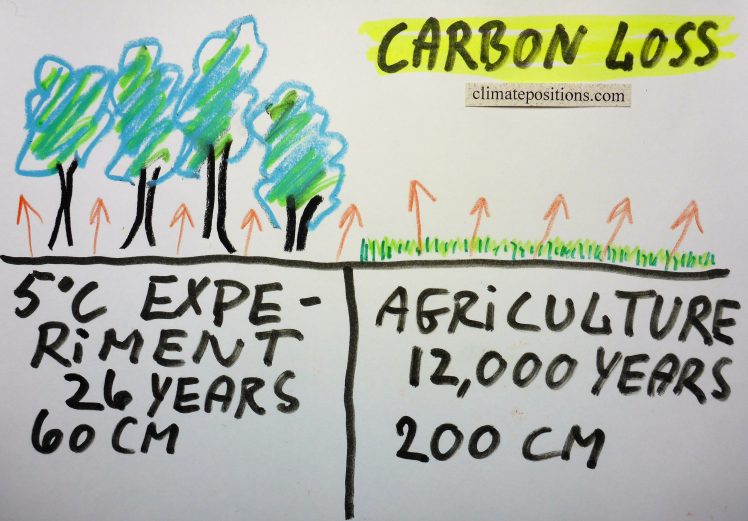 They found that the 5°C soil-warming resulted in a four-phase pattern of soil organic matter decay and carbon dioxide fluxes to the atmosphere:

Since 1991, when the experiment began, the warmed-up soil lost about 17% of the carbon that had been stored in the top 60cm of the soil. In other words, the results support projections of a long-term, self-reinforcing carbon feedback from mid-latitude forests, leading to potentially unstoppable increase in global temperatures. Melillo said about the worrying findings: “Each year, mostly from fossil fuel burning, we are releasing about 10 billion tons of carbon into the atmosphere. The world’s soils contain about 3,500 billion tons of carbon. If a significant amount of that is added to the atmosphere, due to microbial activity, that will accelerate the global warming process. Once this self-reinforcing feedback begins, there is no easy way to turn it off. There is no switch to flip.” (‘Guardian‘).

Another ‘Study‘ from ‘Woods Hole Research Center‘ and ‘ISRIC‘, published August 2017, has examined the removal of carbon from the soil as a result of 12,000 years of agriculture worldwide. For the study, the scientists used a machine learning-based model, a global compilation of soil carbon data, and the ‘History Database of the Global Environment‘ (HYDE) land use data.

The study revealed that 12,000 years of agriculture has removed 133 billion tons of carbon from the top 2 meters of soil, with the rate of loss increasing dramatically the last 200 years. The total carbon removal nearly equals the carbon emissions from deforestation worldwide (or around 13 years of carbon emissions from Fossil Fuels and industrial processes). The study also showed that cropping causes more soil carbon loss on a particular parcel of land than grazing, but because grazing covers much more land surface the total losses from cropping and grazing are nearly equal.

Leading researcher Jonathan Sanderman said: “The large soil carbon debt can be thought of as the maximum potential for soils to remove carbon from the atmosphere and act as a natural climate solution. Even realizing only a fraction of this potential would be an important climate mitigation strategy.”

The Guardian (about the experiment): ‘Article‘.