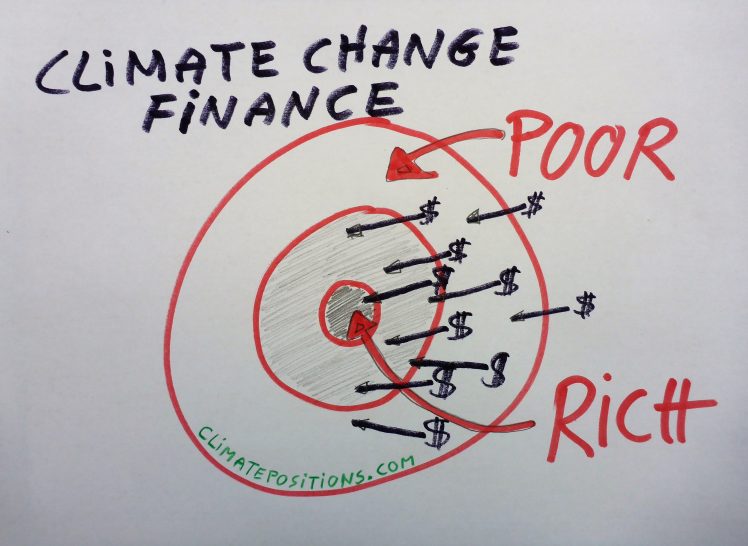 A more honorable source of knowledge appears to be ‘Climate Funds Update‘ – an independent website that provides information on “international climate finance initiatives designed to help developing countries address the challenges of climate change.” According to Climate Funds Update a total of $22 billion was financed in 2017 (accumulated since 2003, funding approved), of which about $16 billion were received by 150 countries (with amounts to specific countries). 138 out of the 150 recipient countries have full data in ClimatePositions and combined they received $14 billion (a minor fraction of climate finance to regions are not included). These 138 countries are examined below to reveal the variations of so called “developing countries” in the context of the ‘Paris Agreement‘.

The 61 countries with Climate Debt received nearly half of the Climate Change Finance and they can be described like this:

If “Climate Change Finance with new and additional money to developing countries” include recipient countries such as Kuwait, Trinidad and Tobago, Oman, Kazakhstan, Russia, China, etc., then poor developing countries without responsibility for the climate destruction will certainly be left behind.

Oxfam, press release: “For the world’s poorest, latest trends in climate finance are going in the wrong direction”: ‘https://www.oxfam.org/en/pressroom/pressreleases/2018-05-03/worlds-poorest-latest-trends-climate-finance-are-going-wrong’

The Brookings Institution: “Roadmap to Where? Is the $100 billion by 2020 pledge from Copenhagen still realistic?”: ‘https://www.brookings.edu/blog/planetpolicy/2016/10/20/roadmap-to-where-is-the-100-billion-by-2020-pledge-from-copenhagen-still-realistic/’

Made for minds: “Climate finance: Footing the bill for a global crisis”: ‘http://www.dw.com/en/climate-finance-footing-the-bill-for-a-global-crisis/a-41393588′