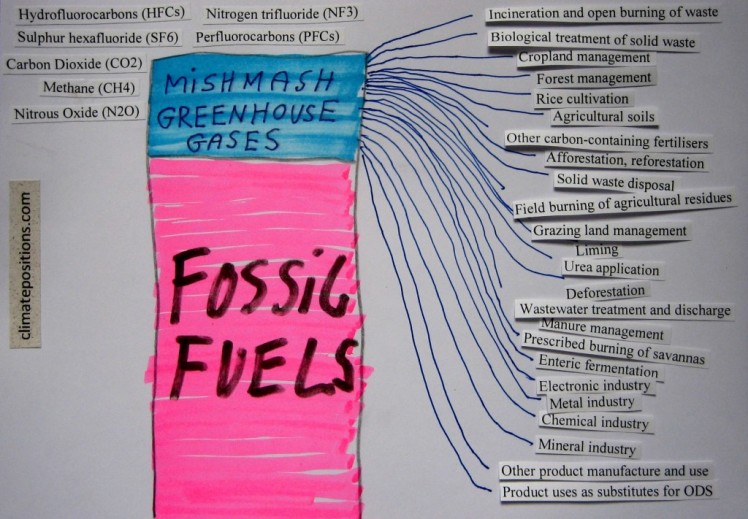 These are the headlines of the succeeding sections:

How to compare the global warming potential of greenhouse gases

However, if the “100-year GWP” is replaced with a “20-year GWP” the GWP of methane is 56; or a “500-year GWP” which provides methane with a GWP of only 6.5. The changed outcome is due to different life-circles of carbon dioxide and methane: Changes in the atmospheric concentrations of carbon dioxide persist for thousands of years1 whereas methane lasts for only about 14 years, on average. Comparable data of other greenhouse gases are available in the following section.

The sources and global warming potential of the greenhouse gases

♦ Life-time in atmosphere: 14 years on average.

♦ Life-time in atmosphere: 114 years on average.

F-gases are a range of synthetic (no natural sources), potent greenhouse gases that are emitted from a variety of industrial processes. Below are the four main categories in which there are numerous subgroups.

These chemicals were developed as a replacement for chlorofluorocarbons (CFCs) and hydrochlorofluorocarbons (HCFCs) because they do not deplete the stratospheric ozone layer. They are released into the atmosphere through leaks, servicing, and disposal of equipment.

Is this mishmash deliberately used to delay the COP negotiations?

The ‘COP-submissions’ by March 2015, make no assurances regarding the exact reduction rates of fossil fuel greenhouse gas emissions (red category). What the submissions do express, are voluntary intentions to overall emission reductions among all the greenhouse gases reviewed above and among all the sources of anthropological greenhouse gas emissions (red and blue categories combined). How the intended greenhouse gas reductions will be implemented and controlled – under these extremely complicated circumstances (a blend of red, blue and green) – is beyond me. To illustrate the absurdity of this discouraging mishmash-approach, the ‘Russian submission’ is used as a case:

Russia is the 4th largest emitter of CO2 from fossil fuels and per capita emissions were 12.9 tons in 2012, or 13% higher than in the 1990s. Now, Putin’s intentions are to reduce greenhouse gas emissions by at least 25% by 2030 compared to 1990. However, contributions of the Russian forests will be, quote (in translation): “…fully taken into account.” And, quote: “Rational use, protection, maintenance and forest reproduction, i.e. forest management, is one of the most important elements of the Russian policy to reduce greenhouse gas emissions.” The Russian forest cover is stable at 49% of the total area, the population density is one-sixth of the world’s average and the Russian territory is the size of China and Australia combined. How will it be possible to verify greenhouse gas reductions due to changes in “forest management” in such huge and sparsely populated areas? One may also ask: Does Putin intends to reduce greenhouse gas emissions from fossil fuels by 2030, at all?

Similar greenhouse gas reduction verification problems worldwide are apparent with regard to agricultural practices, livestock, poultry and dairy farms, landfills, wastewater, industrial processes, leaks of F-gases etc. By mingling all these (important but extremely complicated) emission issues with reductions from fossil fuels, the latter is blurred and downgraded. The result is likely to become a depressingly inadequate global climate agreement at COP-21 in Paris in November-December 2015. Had there been genuine willingness among the major fossil fuel countries, to phase out coal, oil and gas, this issue would have been confronted in a separate global fossil fuel agreement, decades ago (CO2 Emissions from fossil fuels is a fairly workable key-indicator). The other sources of anthropologic emissions are different in nature and circumstances and require various approaches.

Around three-quarter of the anthropogenic global warming is due to burning of fossil fuels. Atmospheric concentrations of CO2 have increased from 317 ppm in 1960 to around 400 ppm in 2015 and the changed concentrations will persist for thousands of years. If the mishmash-approach is a deliberate delaying COP-strategy it has been remarkably successful!

1 Carbon dioxide’s lifetime is poorly defined because the gas is not destroyed over time, but instead moves between different parts of the atmosphere, ocean and land (read about the ‘carbon cycle’).

In ClimatePositions the current Russian Climate Debt is $202 billion. The Climate Debt is calculated on the basis of ‘twelve indicators’ among which CO2 Emissions from fossil fuels per capita is principal. If Russia paid its Climate Debt to a fair (non-existing) global climate fund, the authoritarian regime (like other Climate Debt Free countries; see the ‘ranking’) could apply for funding aimed at all kinds of greenhouse gas reduction projects, including forest management projects.