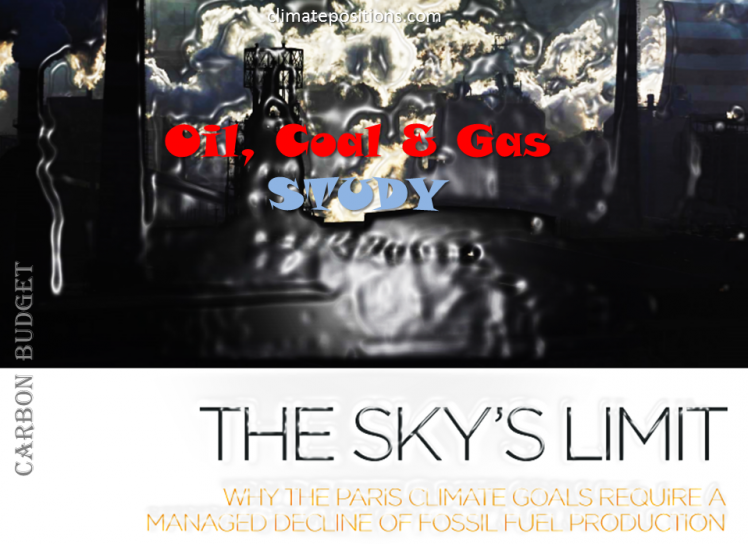 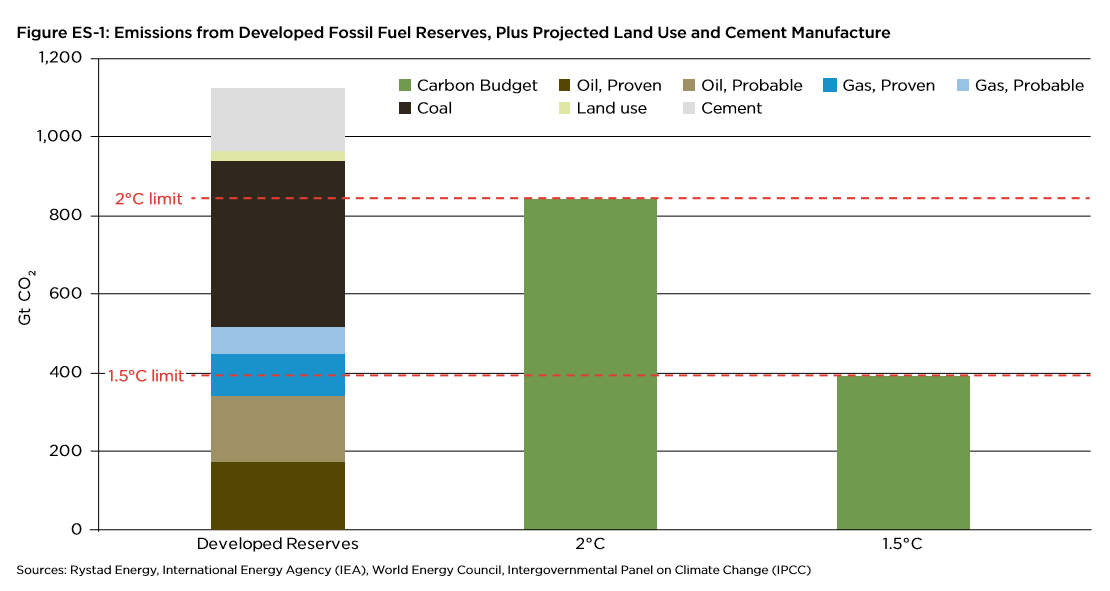 The bars in the diagram include estimates of future CO2 Emissions from land use and cement production. However, for methodological reasons² the carbon budget discussed in the study relate only to CO2, whereas other greenhouse gases are factored in. Consequently, changed assumptions of future carbon emissions from land use, cement production and greenhouse gases will change the fossil fuel carbon budget.

As it seems, even an immediate global production-stop of coal and about half of the already developed oil reserves (the “probable” reserves), would not be enough to secure the 1.5°C warming limit (with a medium change), which the Paris Agreement proclaim that all nations shall pursue efforts to secure.

Even a production-stop of half of the already developed coal reserves would not be enough to secure the 2°C warming limit (with a likely change), which is a binding commitment in the Paris Agreement.

The next diagram from the study shows the carbon budgets in comparison with CO2 from the fossil fuel reserves – if extracted and burned. For oil and gas both proven and probable reserves are shown in this diagram, while for coal only proven reserves are shown. For a likely chance of keeping warming below 2°C, 68% of the reserves must remain in the ground and for a medium chance of limiting warming to 1.5°C, 85% must remain.

In other words, all nations will soon be legally committed to leave all coal underground – or collectively execute actions with similar effect. Or as the study puts it: “Governments would need to make hard choices about the phase-out of existing projects and, the report recommends, this should start in the developed world.” Projected investments in new fields, mines and infrastructure is estimated to be around $14 trillion over the next 20 years.

Read the inspiring article: ‘Dutch parliament votes to close down country’s coal industry’ (the Guardian) and this article by June 2015: ‘Court has ordered Netherlands to reduce carbon emissions by 25% within five years in the world’s first climate change liability lawsuit’ (from this site). 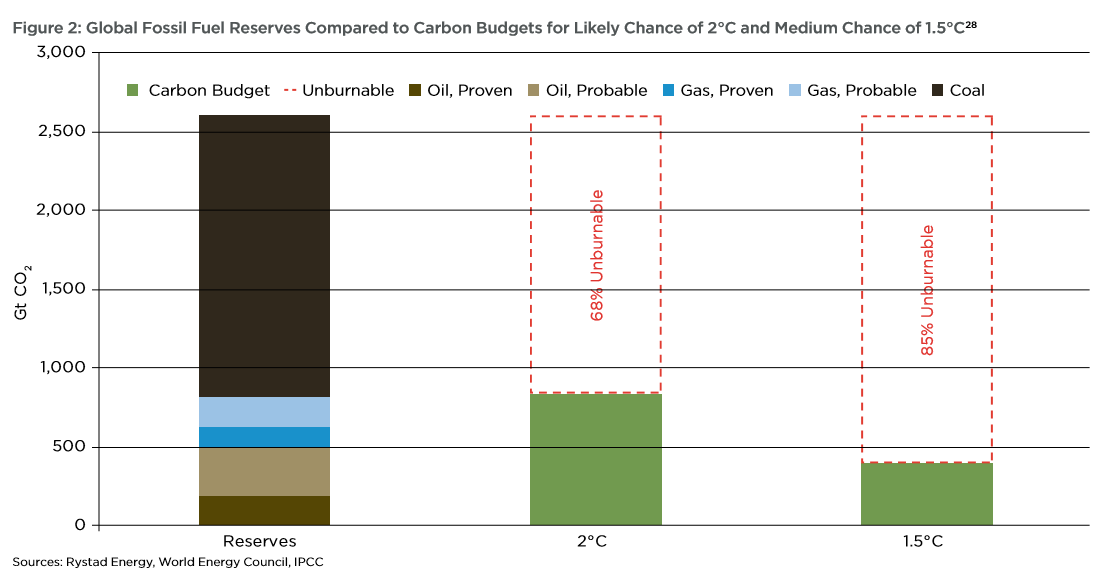 ²From the study, quote: “The carbon budgets concept applies to CO2, because of the way it accumulates in the atmosphere over many decades. The budgets concept cannot be used in the same way to account for other greenhouse gases, which have a more complex warming effect because they do not last for as long in the atmosphere. Methane is the most important of these other gases. In the short term, methane is a much more potent greenhouse gas than CO2. However, because methane molecules break down after an average of twelve years, their direct warming effect occurs only during those years after they are emitted, while they are still present in the atmosphere. Methane also has indirect effects lasting beyond twelve years, due to feedback loops in the climate system.” And, quote: “For these reasons, carbon budgets as discussed in this report relate only to CO2. However, other greenhouse gases are factored in when the sizes of CO2 budgets are calculated. Assumptions are made about what other gases’ future emissions will be, and so if those assumptions change, then the sizes of carbon budgets change. Recent studies have indicated that methane leakage rates from natural gas facilities in the United States are much higher than previously thought, especially as a result of hydraulic fracturing, or “fracking.” Such changed assumptions may require CO2 budgets to be revised downward, which would allow for less CO2 to be emitted.”

Article in the Guardian: ‘https://www.theguardian.com/environment/2016/sep/23/existing-coal-oil-and-gas-fields-will-blow-carbon-budget-study‘.

PowerPoint collage by Claus Andersen, 2016 (manipulated picture from the study).