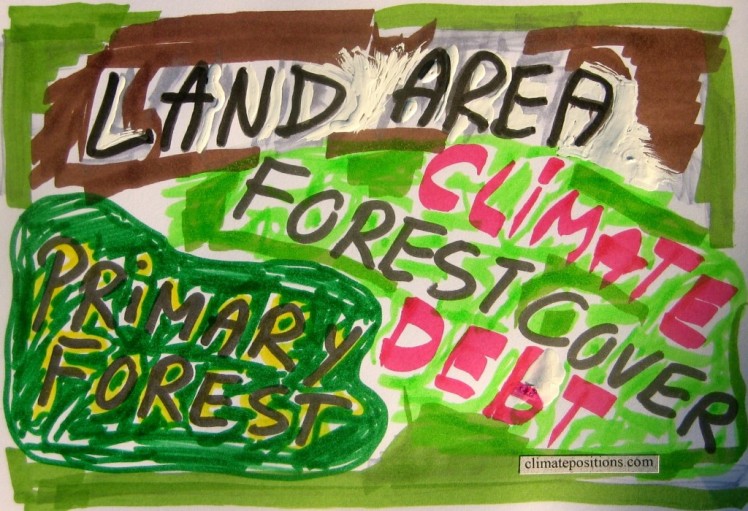 Forest Cover is defined as forest land spanning more than 5,000 m² (0.5 hectares) with trees higher than 5 meters and a canopy cover of more than 10 percent, or trees able to reach these thresholds – it does not include land that is predominantly under agricultural or urban land use. Globally the Forest Cover is 31% of the land area on the planet (planted forest accounts for 7% of forests). In ClimatePositions the change in national Forest Cover (as a percentage of the land area) since 1990, affects the level of allowable CO2 Emissions per capita and thus the Climate Contribution (climate debt). See the calculation examples in the table below.

Primary Forest is defined as naturally regenerated forest of native species, where there are no clearly visible indications of human activities and the ecological processes are not significantly disturbed. The Primary Forests is about 36% of the global Forest Cover, or 11% of the land area. According to the Assessment 81 out of 200 countries have reported that they have no Primary Forests left but in some cases, this may be due to a lack of data¹ rather than a complete lack of Primary Forest. Primary Forests are often equated with high levels of biological diversity, but this is not always the case². Nevertheless, the size of the area of Primary Forest is an important indicator of the state of forest ecosystems. In ClimatePositions the changes in national Primary Forests (as a percentage of the land area) since 2000 (or the first available data year) affects the level of allowable CO2 Emissions per capita and thus the Climate Contribution (climate debt). Primary Forest counts twice compared with Forest Cover per km² in the calculation. See the examples with the 20 countries with the largest Forest Cover in the three tables below.

The eight Contribution Free countries among the twenty would be obvious beneficiaries for forest projects financed by a Global Climate Fund if the countries causing the destruction of the climate paid their climate debt (see the ranking ‘here’). Climate change is expected to affect forests’ susceptibility to disturbances such as fires, droughts, landslides, species invasions, insect and disease outbreaks, and events such as hurricanes, windstorms and ice storms. Interactions between different disturbances make the prediction of future impacts of climate change on forests more difficult.

At the global level the Forest Cover decreased by more than 3 percent between 1990 and 2010 and the Primary Forest decreased by 4 percent between 2000 and 2010. It is worth noting that that wood removals valued just over $100 billion annually in the period 2003–2007 and the value of non-wood product removals (mainly food products) amounted to about $19 billion in 2005. However, the average total public expenditure on forestry was about 40% larger than the collected forest revenue.

NB. Note that Primary Forest has not yet been included as an indicator in the rankings in the menu “Contributions”.

Hypothetical example no 1: If Brazil had maintained the Forest Cover since 1990 and the Primary Forests since 2000,  then the present saving in Climate Contribution (climate debt) would have been $9.5 billion or 39.6% of the accumulated climate debt.

Hypothetical example no 2: If the United States had maintained the Forest Cover since 1990 and the Primary Forests since 2000,  then the additional cost in Climate Contribution (climate debt) would have been $52.2 billion or 2.5% of the accumulated climate debt.

¹ The actual area with Primary Forests is probably slightly higher since information was missing for many of the smaller islands and territories, as well as for countries such as Cameroon and the Dem. Rep. of the Congo (two of the largest countries in the Congo Basin, the second largest expanse of tropical forest) and for Venezuela.

² In the boreal zones (high northern latitudes) and the arid tropics, can be poor in terms of numbers of plant and animal species, while some modified natural forests and forests interspersed with agricultural areas may provide additional habitats and thus harbor more species.

³ Data of Primary Forest in Australia is from 2005.