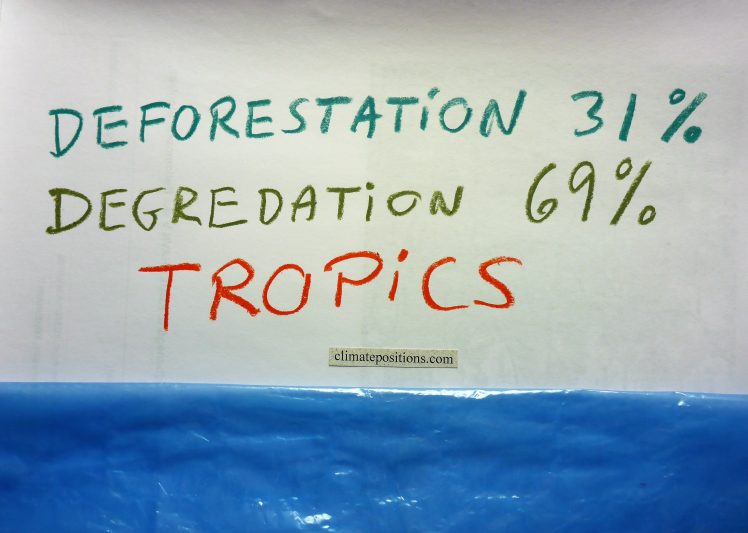 Throughout the tropics selective logging and smallholder farmers removing individual trees for fuel wood adds up across large areas and become considerable. The research went further than previous studies in measuring the impact of disturbance and degradation (thinning of tree density and loss of biodiversity due to selective logging, forests fires, droughts and hunting) within apparently protected forests. Such fine-scale degradation can reduce biomass by up to 75%. Lead author Alessandro Baccini said. “If we’re to keep global temperatures from rising to dangerous levels, we need to drastically reduce emissions and greatly increase forests ability to absorb and store carbon (..) As always, trees are removing carbon from the atmosphere, but the volume of the forest is no longer enough to compensate for the losses. The region is not a sink anymore.”

Carbon emissions from tropical forests are coming from:

The article: ‘We are destroying rainforests so quickly they may be gone in 100 years‘ (Guardian, January 2017) suggests that: “If countries stick to their pledges and let damaged forests recover, annual global greenhouse gas emissions could be reduced by as much as 24 to 30% – an enormous step.”

In ClimatePositions area-changes of ‘Forest Cover‘ since 1990, and area-changes of ‘Primary Forest‘ since 2000, are (inadequate but worldwide available) ‘Indicators‘, when calculating national Climate Debts.

Read also Greenpeace’s report on Swedish boreal forests: ‘How Europe’s tissue giant is wiping away the boreal‘ (pdf 84 pages, September 2017), saying: “Since the 1950s, in Sweden’s portion of the Great Northern Forest, large areas of old-growth forest have been clearcut and the wider forest landscape fragmented. This has led to population declines in hundreds of forest species, with logging currently believed to be having significant negative impacts on over 1,300 red-listed plants, animals, fungi and lichens.”

The Guardian: ‘We are destroying rainforests so quickly they may be gone in 100 years‘. January 2017.