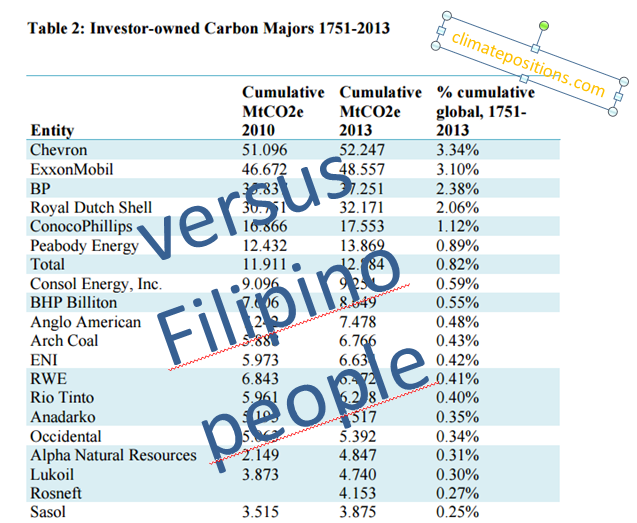 The legal complaint is the first step towards an official investigation of the companies starting in October. The Commission does not have the power to force the companies to reduce greenhouse gas emissions; however, it can make recommendations to the government.

The complaint has been brought by ‘typhoon‘ survivors and 14 non-governmental organizations, and is supported by close to 32,000 Filipinos. The 47 carbon companies have been chosen on the bases of ‘research by Richard Heede (2013)‘, Climate Accountability Institute in Colorado, concluding that just 90 global companies had produced close to 65% of all anthropogenic CO2 between 1751 and 2013. Since pre-industrial times CO2 concentrations in the atmosphere have increased by 40%.

The complaint claims that the carbon companies (Carbon Majors) are “ignoring the science and the harms related to the combustion and use of the coal, oil and gas that they produce. The companies have the technical and financial capability to prevent the harm. As a means to comply with the requirements of identifying, preventing, mitigating, and accounting for adverse human rights impacts, it is important that immediate steps are taken by the companies to eliminate the risk of further human rights infringements.”

By the way, in ClimatePositions the Philippines have zero Climate Debt – read the articles ‘Climate change performance of Malaysia, Thailand, Indonesia and the Philippines‘ and ‘New at COP21: The Vulnerable Twenty Group (V20)‘. Read also the article ‘Court has ordered Netherlands to reduce carbon emissions by 25% within five years in the world’s first climate change liability lawsuit‘.

PowerPoint image by Claus Andersen, 2016 (list of carbon companies is from the legal complaint).