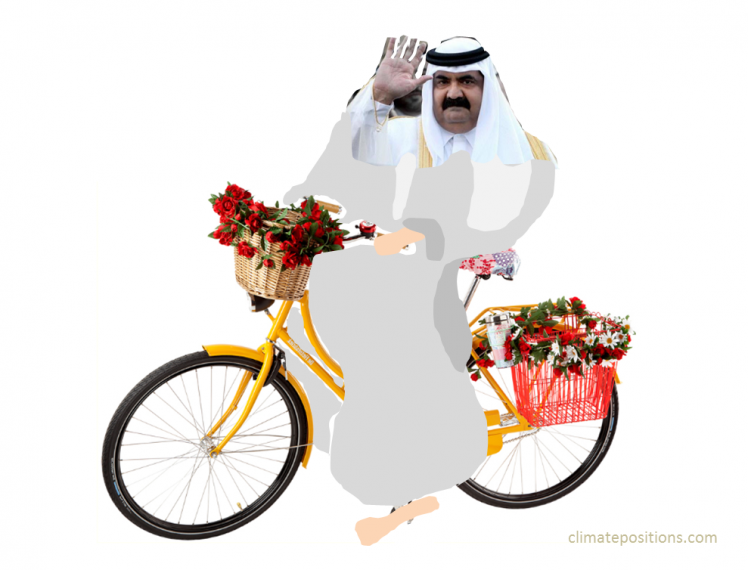 The table shows the correlation between:

Read the table like this: The per capita fossil fuel production of Qatar is 73.0 times larger than the world average and the Climate Debt is 44.7 times larger. More comments below the table.

Fossil fuel reserves are planetary recourses which happen to be located in certain fortunate countries. Extraction and export is basically detached from domestic consumption. Qatar could have decided to export the entire oil production and spent the revenue on domestic prosperity and green transition – this would have left the small dictatorship without any Climate Debt in ClimatePositions. However, the ‘Qatari per capita CO2 Emissions’ from fossil fuels is 10.8 times larger than the world average and the Climate Debt is 44.7 times larger. Note that the size of the Climate Debt expresses the will and capability to positive changes since 2000 (read ‘more‘).

Qatar is an extreme representative of the overall trend among the 20 listed countries:

Among the 20 countries, only Gabon and Azerbaijan has no Climate Debt, while Venezuela’s is just below world average. All other countries on the list (85%) have a Climate Debt between 1.7 and 44.7 times the world average. The Climate Debt of an average country among the 20 is 11.2 times larger than the world average. However, Norway has managed to challenge the negative correlation: the huge Norwegian per capita fossil fuel production (rank 4) and the great economic wealth (rank 5) is achieved with more moderate CO2 Emissions (rank 26) and ditto Climate Debt (rank 16). Read this ‘article about Norway‘.

¹The indicator of Ecological Footprint is set at world average (in ClimatePositions) for Brunei and Equatorial Guinea.

²Out of 147 countries with full data in ClimatePositions plus Brunei and Equatorial Guinea.

Data on production of oil, natural gas and coal (tons oil equivalents) is from BPs statistical review 2014: ‘http://www.bp.com/en/global/corporate/about-bp/energy-economics/statistical-review-of-world-energy.html‘. Per capita production 2013 is calculated by use of population data from: ‘http://www.gapminder.org/‘

Article in The Guardian: ‘Saudi Arabia’s solar-for-oil plan is a ray of hope‘.